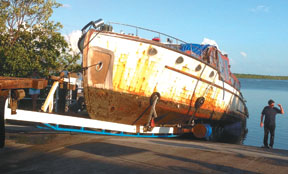 The Red Baron put up a fight as she was pulled from the water. SUBMITTED PHOTOS

WHAT IF….we could step back in time some 77 years ago to the year 1935? We would find that the NFL Champions were the Detroit Lions, the World Series Champions were the Detroit Tigers and the most popular Christmas gifts were Monopoly and the Fire Fly Sled. You would also find the gem that one local Marco Island man has asked himself “WHAT IF” several times since discovering her… THE RED BARON! She is 63 feet long and every bit of 66,000 pounds, a beam of 13 feet, 6 inches and powered by massive twin GMC Detroit 671 diesels. Her hull is 1-1/2 inch Alaskan red cedar planking over oak frames and was the state of the art yacht pushing tons of water as she danced past many gawking onlookers of the day. Being built for the West Coast Sears executive, Stanley Donough, her name was then Zimmie. She was famous for the first transcontinental radio call in the United States to the Sears headquarters on the East Coast. During World War II she saw service as a recovery vessel for practice torpedoes and one of her famous passengers was President Roosevelt who vacationed aboard the yacht that sleeps 12 and cruises at 21 knots.

Craig Jones has been longing to take this beauty back to her time since he laid eyes on her in January, 2008. Being a visionary and history buff, he has pushed forward with his dream to rebuild what some would consider a lost cause as many turned a deaf ear to his plight.

The Red Baron has been sunk several times. It was much of

Craig’s due diligence that kept her afloat, checking the yacht continually from 2008 until October 16, 2012. Many wonderful family and friends also helped patch holes and more to keep until the day finally arrived to pull her from the dreadful waters that have been deteriorating her to almost beyond recognition.

The Red Baron was becoming an eye sore for many on the waters around Marco Island and Goodland as she was rotting away to her current pitiful state. Mr. Jones had to overcome many obstacles in order to perform the duties of removing the now waterlogged vessel, currently at 35 tons; getting permits to have such a wide vessel on the road, permission from the Goodland Boat Ramp, EPA and more. He built his own trailer with large barrels at the rear in order to make her buoyant enough to lift her out of the water so that the back tires would not sink in the sand. High tide was a must as it had to be perfectly timed to give the most lift. Duane Thomas donated his truck to pull the heavy vessel from the water. After hours of laborious preparations to exit the ramp, difficulties halted getting up the ramp and left The Red Baron temporarily stranded. Quick and creative thinkers orchestrated the super team from Alligator Towing out of Ft. Myers who graciously saw the value of this mission and donated over $50,000 worth of equipment and has already spent hours in moving her to her current resting place at the Goodland Public Boat Ramp.

It took many hands and many hours to prepare the Red Baron for transport.

Here they are awaiting a decision from County Commissioners to determine the fate of The Red Baron/Zimmie. Collier County Parks & Recreation Department and Administrative Services Division have given their support to this project. The people of Goodland have also been amazing in supporting the project and many wish it to remain in the area for the restoration!

Once in the restorative environment, Craig Jones, who is a Coach Builder, will use his craftsmanship to tutor cadets in the lost art of shipbuilding. The hopes of Craig and Bronwyn Jones are to create a piece of history for all to enjoy in the Marco Island area. Visions of a possible bed and breakfast, historical tours and more are looming in their minds as they take the once eyesore of the area and transform her into a landmark attraction for all to enjoy. Ultimately, a museum will be sought for her long-term care and preservation.

The Red Baron is a historical monument so donations and assistance are greatly appreciated in the restoration. Be a part of returning a piece of history back to her original beauty and grandeur so that generations to arrive may take a trip back in time to 1935!! Give them the opportunity to enjoy not only the grand 63- foot yacht that made history in her day, but also allow them to marvel at those of us who cared enough to restore history to edify their education and desires!