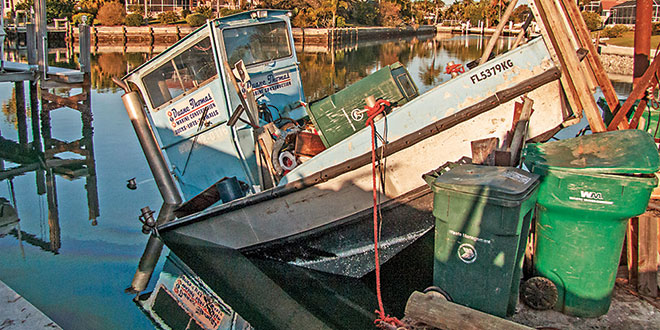 Early that evening, a 911 came in reporting a partially sunken tug boat attached to a construction barge in Hernando canal behind 549 Hernando Drive. A sheen of diesel fuel could be seen on the top of the water as well. The tug and

According to Marco Island Police Chief Al Schettino, an investigation has been opened into the incident, but he said the stern (or back) of the tug became submerged in the canal after the seal around the propeller shaft broke away and allowed water to enter the boat.

Schettino added that the

overall environmental impact of the incident was minimal, with just three gallons of diesel fuel leaking into the canal. Although environmental regulations require that the US Coast Guard be notified when there is a fuel leak of five gallons or more, Schettino said MIPD took greater precaution and notified the Coast Guard anyway.