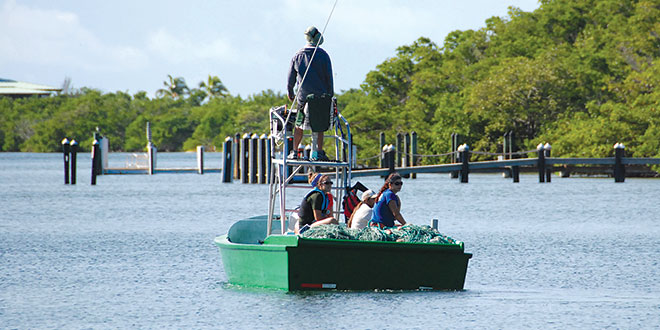 About an hour after the Dolphin Explorer’s Bob Erickson and Meredith Barnard spotted Halfway and Skipper in Little Marco Pass, the cavalry arrived, complete with a net boat captained by Larry Fulford, a commercial fisherman with more than 30 years experience with dolphin capture and release efforts.

Finding one specific dolphin in the waters around Marco Island is akin to looking for the proverbial needle in a haystack. At least that is what I thought on the morning of Sept. 4 when I set out with researchers from Sea Excursion’s 10,000 Islands Dolphin Project to find one female baby dolphin whose tail had somehow become entangled with a foot of wire leader from a fishing rig.

These same researchers were the ones who spotted the baby dolphin — Skipper — and her entanglement in early August while aboard one of their Dolphin Explorer expeditions. They reported the injury to state and federal authorities, and in the weeks that followed, they also monitored the behavior and movements of Skipper and her mother, Halfway, keeping close tabs on the calf’s condition.

NOAA’s National Marine Fisheries Service (NMFS) deemed the injury life threatening, and launched a multi-agency effort to locate, capture and free Skipper from her entanglement. NMFS officials reached out to the Sarasota Dolphin Research Program (a partnership between Mote Marine Laboratory and the Chicago Zoological Society) for assistance, and the partnership involved members of the Southeast Regional Marine

Mother and calf spent the morning hunting and swimming through Little Marco Pass.

Now, on the balmy, late summer morning, the Dolphin Explorer crew (with me tagging along) loaded up in four boats to be part of Skipper’s rescue effort. The first order of business: To find Skipper and Halfway.

“An impossible task,” I thought as the Dolphin Explorer’s Mercury engine roared away from the dock at Rose Marina and into Factory Bay. Boy, was I wrong!

Led by naturalist Kent Morse and marine biologist James Liviccari, the Dolphin Explorer researchers have spent most of the last decade studying the bottlenose dolphins who call the waters in and around Marco Island home. From identification and distribution to social behaviors and hunting patterns to mating and family structure, these researchers have an unparalleled knowledge and expertise when it comes to the local dolphin population.

It is this wealth of information that saved Marco’s most famous dolphin, Seymour, in March 2012, who had fishing wire wrapped around his tail.

Skipper’s mother, Halfway, is among the most successful of Marco Island’s resident female dolphins at calving and raising her young. Her lineage includes Seymour (2004), Simon (2007), Kaya (2010) and Skipper (2013).

It also helped Skipper — Seymour’s younger sister — on Sept. 4, as the Dolphin Explorer’s depth of research helped lead researchers Bob Erickson and Meredith Barnard to a cove in Little Marco Pass where Skipper and Halfway were enjoying a morning swim and hunt and where rescuers eventually freed Skipper from her entanglement.

“We couldn’t have done it without (the Dolphin Explorer),” said Dr. Randy Wells, director of the Sarasota Dolphin Research Program (SDRP) and the rescue’s coordinator.

The Search for Skipper

Upon leaving Factory Bay, Erickson turned the Dolphin Explorer pontoon boat southeast toward the Jolley Bridge. The morning’s search for Skipper and Halfway already had a major mark against it, as it was high tide. According to Erickson, it can be very tricky to spot a dolphin during high tide because there are more places for them to hide underwater.

“You actually see more dolphins during the last hour of an outgoing tide,” Erickson said.

While he drove the boat, Barnard explained some of the documented movement and behavioral patterns of Halfway and Skipper. “We usually see Halfway and Skipper right under Jolley Bridge,” she noted. “We also see them north to Isles

Skipper and Halfway were spotted Saturday, Sept. 13 — just 10 days post-rescue — by the Dolphin Explorer. As part of the rescueeffort, Skipper was tagged, and by all accounts, mom and calf are doing great. PHOTO BY BOB MCCONVILLE

of Capri and Keewaydin. We see them a lot at the Capri seawall. Halfway has taught all of her calves to hunt there. Dolphins often will hunt against manmade structures and mangrove islands.”

The search took us through Big Marco River to some of the residential canals of the Isles of Capri back through Marco Bay and around Johnson Island and Umbrella Island and into Little Marco Pass. Along the way, we saw a small group of four well-known Marco dolphins: a big male, Trixie; Captain Jack; Sparky; and Keegan.

After the quick encounter, we were on our way. About 15 minutes and a short trip north later, both Erickson and Barnard spotted Halfway and Skipper. Who saw the pair first remains up for playful debate, but the fact remained the needle in the haystack had been found. Now, it was time to call in the cavalry.

With the entanglement gone and a dose of antibiotics administered, the rescue team prepares to release Skipper and Halfway. PHOTOS BY NOELLE H. LOWERY

all — that Skipper and Halfway had been found, it was all over but the waiting. We waited a good hour for all of the other boats to find our location; they trickled in slowly. First came the other three Dolphin Explorer boats, followed by NMFS, FWC, SDRP, Sea World, Clearwater Marine Aquarium, Rookery Bay and Capt. Larry Fulford’s net boat.

The main goal while we waited was to not lose sight of Skipper and Halfway, a task made easier when the rest of the Dolphin Explorer crew arrived on the scene. The dolphins flirted with the four Dolphin Explorer boats, as well as a nearby fishing boat, swimming cautiously among them.

To be sure, it was a delicate dance, as the pontoon boat slowly glided behind the dolphin. All the while, Erickson made certain not to drive Skipper and Halfway in any one particular direction.

The dolphin pair began making its way south down Little Marco Pass just as the rescue party arrived, and a silent passing of the baton occurred from the Dolphin Explorer crew to the rescue team, which was led by NMFS and SDRP. Fulford, a commercial fisherman who has

Left, despite what appeared to be some discomfort from the entanglement, Skipper seemed playful in the water, as she swam leisurely toward the familiar Dolphin Explorer pontoon.

spent the last 30 years aiding in marine wildlife rescues, searched for a clam, shallow where the rescue could be performed.

He identified a shallow where Little Marco Pass meets Hurricane Pass. With storm clouds building and a change in the wind, the rescue team anxiously waited for Skipper and Halfway to find their way to the area. A little coaxing helped along the way.

Once near the shallow, Fulford’s boat set a net to encircle the dolphins. The net corral then was moved to the shallower water, and rescue team members got into the water around the net and briefly restrained the dolphins. During the effort, rescuers made certain Skipper and Halfway maintained visual and acoustic contact to minimize stress on the animals.

While in the water, veterinarians found that the metal fishing leader was wrapped around the base of Skipper’s tail peduncle and flukes. Left unchecked, the stiff metal wire would have cut deeper into Skipper’s tail, possibly severing it. After the wire was removed, Skipper was given an injection of antibiotics, and she and Halfway were released.

According to Gretchen Lovewell, manager of Mote Marine’s Stranding Investigations Program, Skipper is the 22nd

live animal that Mote has helped to rescue this year. In fact, the team recently helped to rescue “Speedy,” a dolphin that was trapped in a lake in the Everglades in July. In addition to responding to stranded dolphins and sea turtles, Mote’s team also supports FWC’s response to stranded manatees in Southwest Florida.

Even so, said Wells, rescues like these are “very complicated. There are a lot of sleepless nights trying to ensure the safety of the dolphins and the people, selecting the right number of people. Fortunately, we have access to a lot of interested people to call upon to help. We have a good set of people to draw from.”

Among those “interested people” are the researchers with the Dolphin Explorer, without whom it is uncertain Skipper and Halfway would have been found at all. “It is not an insignificant aspect that we are trying to find the needle in the haystack,” said Wells. “The Dolphin Explorer made all of the difference. We are fortunate to have people like them on the ground.”