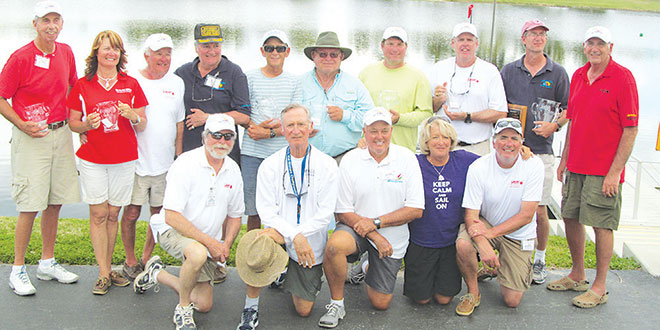 The top finishers in the two classes in the 2015 RC Laser Midwinter Championship Regatta.

Mackle Park’s lake was recently transformed into a platform for friendly rivalry that saw competitors slowly striding to and fro along one shore with eyes locked on small craft slicing through placid waters.

It’s a scene is that’s been repeated there for the last 12 years during the first weekend in March when the annual RC Laser Midwinter Championship Regatta takes place.

Each year, the event attracts participants from near and far, some hailing from as far away as Canada and Great Britain, as well as a host of Northeastern and Midwestern states. The 2015 Regatta was won for the fourth consecutive time by Bahamas resident Jim Kaighin.

Encouraged by a crowd of enthusiastic onlookers, the participants raced their remote control sailboats around a circuit marked off by buoys, trying to log the best time during multiple heats held over the two-day

period. They were divided into two classes, based on their times, with the top five finishers in each class receiving trophies at the competition’s end.

“This is the longest standing RC laser regatta in the country, said the event’s chairman, Rocky Cale. This is our 12th annual midwinter championship. We have 29 boats and we had a limit of 30, so we’re real pleased with the turnout.”

A “laser” is a 15-foot, Olympic class sailboat and the remote control version is a 1/8 scale version. They are operated from a console that enables hobbyists to control miniature’s rudder and its main sheet sail. Operators also have the option of selecting from three different sails, to suit varying wind conditions.

Dave Branning, of Tilghman Island, Md., was taking part for the eighth year. “I’m on a month’s vacation and I’m sailing in five different regattas and three different classes in Florida 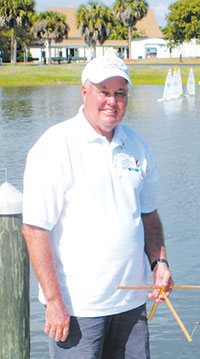 and Charleston, S.C.,” he said. “It’s a lot of fun, a lot of great people. Some of these people, we know from the Northeast and the Midwest. A lot of snowbirds too.”

Bill Ewing, of Red Bank, N.J., a first-time participant in the regatta, described it as a wonderful experience.

“I had a very good yesterday,” Ewing said on March 1. “I was in second place at the end of the day. I didn’t have such a good day today. I don’t know where I ended up. Probably not in the top five, but it’s a very stiff group and I feel lucky to be here, especially with the weather back East.”

The regatta director was Dave Brawner, also of New Jersey. This was the fourth year that he has served in that role. Brawner is a former president of the American Model Yachting Association and the organization’s current model racing champion,

“It’s a great club, so it’s fun to come (to the regatta),” said Brawner. “You’ve got this great location, Mackle

A scene from the 2015 RC Laser Midwinter Championship Regatta

Park. It’s fabulous as so far as the set up of it, the race bank, the way the park treats us. They make it wonderful for us and Florida in the winter doesn’t hurt.”

This was the last year that MIMYC Commodore George Domenech will be involved with organizing the event, as he and his wife are moving from Marco to Florida’s east coast. Domenech is one of the MIMYC’s cofounders, along with Tom Schwartzburg, John Moulten, Jim Karter, Nic Nicolson, John Gerig and Mark Crooks.

Domenech said that although he’s moving, he may still return to compete in the regatta.

“This has become quite an event,” he said. “Everybody’s very happy about it.”