Red Tide ‘Not Present’ — For Now 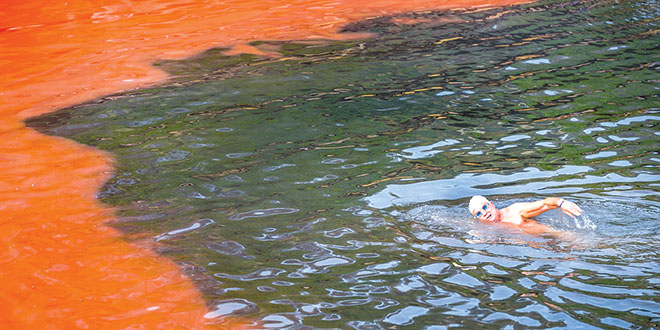 These ominous blood-red tides are caused by a large accumulation of algae in coastal waters and are especially common along the coast of Florida. While disconcerting, only some are harmful to marine life: these are known as HABs, harmful algal blooms, and can even pose a risk to humans.

This time last year, Marco Island and other Southwest Florida coastal communities were reeling from the negative effects of a prolonged red tide bloom. Reports of the bloom began in December 2012 with Marco Island presenting “very low” to “low” concentrations of red tide, and by mid-February 2013, those concentrations crept up to “medium” status.

The 2013-2014 season has been a very different story. Currently, the Collier County Natural Resources Department is reporting that Karenia brevis, or K. brevis — the naturally-occurring dinoflagellate that causes “Florida red tide” — is “not present” in samples of water collected throughout the county’s coastal waters. In fact, the Florida Fish and Wildlife Conservation Commission (FWC) is reporting K. brevis has not been found anywhere along Florida’s coast.

As experts across the state look to the 2014-2015 season, they admit the contrast from one season to the next is just one of the many unanswered puzzles about red tide. “It is unlikely you could attribute it to any one thing,” explains Bryan Fluech, director of the Florida Sea Grant Collier County Extension. “Annual and/or seasonal changes in water temperatures, salinity, winds, nutrients levels, turbidity (how much suspended particles are in the water), rainfall, etc. can influence the severity and frequency of blooms.”

While some 70 percent of red tide blooms occur between August and February, the exact combinations of biology, chemistry and physics leading to a bloom’s inception are unclear. Further, there is disagreement between the scientific and environmental communities as to whether red tide blooms are happening more frequently, are more extreme or are fueled by the presence of fertilizers and pesticides in stormwater runoff.

According to Fluech, there are a number of organisms that can cause harmful algal blooms (HABs) in the Gulf of Mexico, and K. brevis, is just one of them. “A source of confusion is that the term ‘red tide’ is often used to describe any one of a number of HAB that we can get, even though Florida red tide is attributed to this one species. Like other HAB-causing organisms, Florida red tide blooms are influenced by a number of physical (sunlight, winds, temperature), chemical (nutrient input, salinity, oxygen levels), and biological (organism’s biology/physiology) factors interacting with one another. Researchers still do not know what the ‘right combination’ of factors is that initiates K. brevis blooms,” he notes.

What is known is that red tides develop typically 10-40 miles offshore, and when conditions are favorable, K. brevis can reproduce very quickly — every 48 to 120 hours — through cell division, creating a bloom. The blooms then work their way closer to shore. They do not originate in rivers, bays and other nearshore environments like some other HABs do.

According to FWC, Florida red tide can’t tolerate lower salinities for extended periods of time. Blooms usually remain in the saltier water found in lower bays and estuaries and closer to passes, like those in the Ten Thousand Islands.

Further, says Fluech, “unlike other HABs where there is a direct link between nutrient run-off 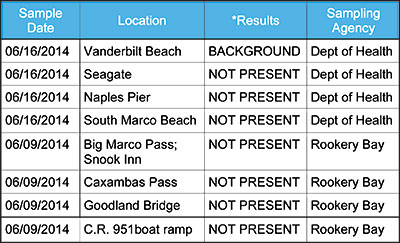 (both natural and man-made) and initiation of blooms, this is not the case for Florida red tide. However, it is still unclear whether K. brevis cells are capable of using these nutrients to maintain their growth once they have made their way inshore.”

Depending on the duration and severity of blooms, though, they can spell big trouble for anyone in their paths for two reasons. First, red tides produce a neurotoxin that inhibits breathing, and second, oxygen is sapped from water when the red tide cells die along with the marine organisms they attack.

In fish, red tide paralyzes the gills and robs them of oxygen. Slow-moving fish and bottom dwellers are most susceptible, but invertebrates such as shrimp and crabs are affected as well. While bivalve species like oysters and clams can filter red tide toxins from their systems after three to six weeks, they are still vulnerable because of the low oxygen levels in the bloom-infested water.

Marine mammals such as manatees can be particularly susceptible to red tide events as toxins can be directly inhaled or consumed with aquatic plants. Shorebirds and wading birds also have been victims of red tide toxins. People — especially those with respiratory problems, such as asthma — are affected too when the red tide toxin goes airborne.

The 2012-2013 bloom left many on land with wracking, hacking coughs and breathing problems, and a slow, suffocating death for those under the sea. Dead fish of all varieties — including Goliath Grouper — were seen floating in canals and washing up on shore. Worse yet, a record 270 manatees were found dead within the known red tide bloom boundary. Four of them were recovered from waters around Marco Island. The last time a red tide bloom caused such carnage was in 1998-1999 when 150 manatees died.

A total of 16 manatees were actually rescued in Southwest Florida during the unusually large and long red tide event. Of those rescued, 15 lived and were released in Lee County.

Whether or not, Southwest Florida will see an active red tide season when the new one starts in August remains to be seen. “I don’t think anyone can say for sure,” Fluech acknowledges. “Florida red tide blooms typically occur from August to February, but can (and have) occurred every month of the year if the right conditions are met. It is not unusual to have other kinds of blooms occur during the summer as rainfall and nutrient runoff increases. This added source of nutrient-laden fresh water can certainly trigger other HABs. The city, county, state and private groups routinely monitor our waters for multiple HABs.”