The Marco Sport Fishing Club, boasting over 300 members, held its first Red Grouper Tournament. “We had 22 boats with 82 anglers in two divisions: 15 mile and 50 mile,” said Howard Laskau. The longest legal red grouper of 20” plus was the goal, plus there was a wild card category in each division: Spanish Mackerel in the 15 mile group and King Mackerel in the 50 mile division. The tournament garnered three title sponsors: Walker’s Marine, Pursuit Boats and Mercury Marine.

According to Jim Walker of Walker’s Marine, 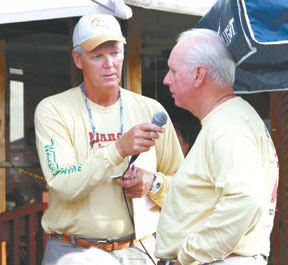 “This is the greatest club we have ever been associated with. We have a good relationship with the Marco Sport Fishing Club. They’re real boaters and have a passion for their boats, for fishing and our area waters. We make every effort to do what we can to support them. One of our best sales people, Captain Sean Black, is here to officially measure the fish and he came straight out from Caxambas to be here this evening.”

Club President, Peter Arcidiacono, said the club has been around since 1988. “We have one 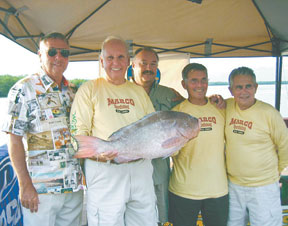 requirement you must want to have fun! Overall we get great participation from club members. We are all local residents. We work tirelessly and giving back to the community is one of our objectives. As an example, Howard Laskau and Allen Bristow, gave up their time to run this tournament. They are either very good at it, or VERY afraid to be in it!”

Howard and Allen kept the score board up to date at a feverish pace as the anglers came in with their catch. If there was a tie, the earliest

in was the winner. Besides bragging rights, cash prizes were awarded to the top four winners. First place received $75 for each person on the boat, second place $50 for each person, third place $40 each and fourth place $25 each.

Anglers crowded the board when time was called. Team A&B consisting of Andrea Battaglia and Bryan Mordecai, won the 15 mile Division, with a 22-1/2-inch red grouper. The second place finisher, Team Gold Nugget, was nudged out of the lead by 3/4 of an inch.

The tournament weekend was complete with an awards barbecue held on Saturday courtesy of Jim Walker and Walker’s Coon Key Marina on Goodland.

The club brings the sport of fishing and proper fishing etiquette to children several times a year through events held at the schools or at nearby marinas. If you’re interested in becoming a member or want more information, go to www.marcosportfishing.com