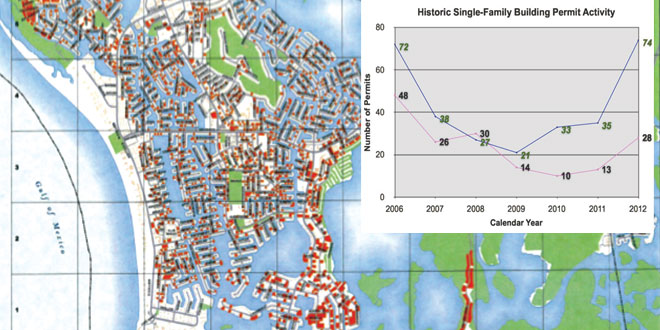 “That is what I heard from everyone,” quips Delgado.

One look at the depressed real estate and home building markets of the time coupled with a global economy trudging through “The Great Recession” was proof enough for Delgado’s detractors back then.

Fast forward three years, though, and the latest home sales and building permit activity on Marco Island may prove Delgado was crazy like a fox. In fact, anyone driving around the island today notices an uptick in home construction activity, and one only needs to open a window to hear the almost ever-present tune of pile-drivers hammering throughout the island. Andrew Hunter Homes accounts for 12 homes under construction right now, and has at least a half-dozen more in the works.

“We hit it right,” Delgado says with a big smile on his face. “We built four houses in the first year. We were hoping to catch the market on the way up. We ended up becoming part of the avalanche of new home building activity.”

Could it be that the Marco Island real estate market is on the rebound?

To be sure, the numbers provide some proof. According to the city’s Planning and Zoning Department, home builders pulled 74 permits for new homes and 28 permits for demolitions last year. That is more than double the permitting activity on both fronts in 2011. In the first quarter of 2013, permits were issued for 18 new homes, five demolitions and four model homes.

“The market is healthy, robust and active,” says Gerry Rosenblum, president of MIAAOR. “It is building upon itself.”

It appears the real estate and home building markets as a whole have been playing a numbers game for some time now.

“Business is up. Permits are up. There has been a steady, significant increase in new home builds and sales — steady increase over the last six months,” explains Kathy Curatolo, Executive Vice President of the Collier Builders Industry Association.

Further, according to the Florida Association of Realtors, home sales across the state were up 6.4 percent last year to 4,720 when compared to 2011. The median sale price also grew by 10.6 percent to $260,000. Townhouses and condos proved to be even hotter commodities with 5,256 sold. That was a 9.1 percent increase in one year. The median sale price jumped 12 percent to $185,000.

By the same token, the overall inventory of existing and new homes for sale has been steadily declining. Countywide, Metrostudy reports the inventory of finished vacant new homes was at its lowest point — 123 — in years last quarter. Take Marco Island where January inventory of homes was down 14 percent to 335 homes. Condo inventory was down 21 percent to 526 condos, and lots were down by 20 percent to 277.

“The market is up very substantially from a 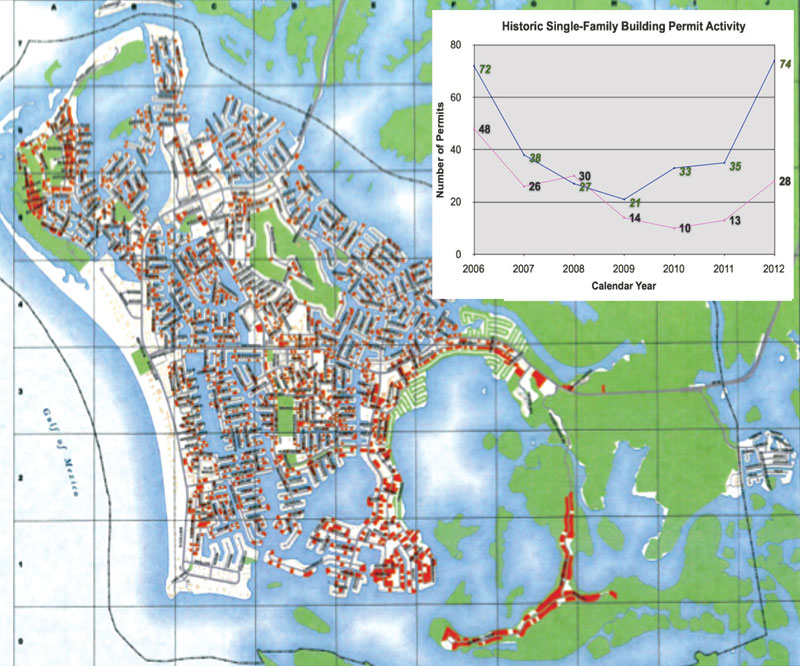 year ago, and huge from two years ago. Three years ago the market was still in decline,” explains Brad Hunter, Chief Economist and National Director of Consulting for Metrostudy.

What’s more is that it appears the Naples and Marco Island combined markets are at the forefront of the market turnaround on a national level. At the end of 2012, Metrostudy reported that the largest gains made last year were in the hardest-hit bubble real estate markets, including Naples/Ft. Myers with a nearly 92 percent jump. The local market growth was only second to Las Vegas at 96 percent.

“We are a leader in some sense,” remarks MIAAOR’s Rosenblum. “Our market started coming back here before a lot of places. Last August, you could sense it was getting better here everyday, but I would talk to others in other markets and hear differently from them.”

Hunter concurs: “This area was famous for having been clobbered by the downturn. People are surprised at how quickly it is recovering.”

So, what is at the center of this turnaround?

Hunter attributes this surge in market activity to three elements. First, builders really cut production back when times were the toughest. Second, investors came in and bought up the for sale supply, turning them into rental properties. Third, people who want to sell now simply have been waiting for stronger vertical pricing pressures.

In the case of Marco Island, there is one more key reason: concentrated wealth. According to Rosenblum, the market upswing began with investors coming into the area. “There are always people with money, and they see what is going on. They sense when the market hits bottom. They start to buy, and get the great deals,” says Rosenblum.

“People with money stimulate the market,” he notes.

Now, though, end-users are in the driver’s seat, Rosenblum continues. “People are buying houses now and keeping them off the market. They are looking at retirement 5, 10, 15 years down the road. They missed the boat last time, and they are locking up their piece of paradise now,” he adds.

Still, despite the numbers and the gains, cautious optimism reigns thanks to continuing economic uncertainties and a frustratingly cumbersome government.

“I think you are going to see a nice, normal, steady sales pace (for the rest of the year),” predicts Rosenblum. “Right now, we have our big season upon us, but you will see a steady climb. It will be back to normal.”

Hunter anticipates “a strong increase in starts and prices as well.”

Curatolo is holding her optimism close to the vest. “There are signs of recovery,” she says. “Let’s see how the next quarter goes, and then how the next six months goes.”

Market-watchers may bolster their confidence with the results of a recent report by the University of Central Florida’s Institute for Economic Competitiveness. The reason: The report indicates the Naples-Marco Island regions will show stronger economic growth than nearly a dozen other metropolitan areas in Florida in 2013.

According to the report, employment in the Naples-Marco Island area will grow more than in any of the 12 metros studied. The expected 2.7 percent increase in employment will drop the current local unemployment rate to 8.3 percent.

As a result, the area also will see a 5.7 percent increase in personal income — the highest in the state — as well as a 2.7 percent jump in the average wage and close to a 2 percent population growth spurt.

Add this information to local real estate and home building markets already on the upswing, and everyone gets a little excited.

“Unarguably, increased economic activity is always a good thing,” says Lina Upham, a planning and zoning technician with the city of Marco Island.

“The American people in general are resilient and their attitudes adjust,” asserts Rosenblum. “I can’t say things are that much better in the economy, but people rebounded. It is stronger here than in the economy as a whole. We adjusted to the bottom.”