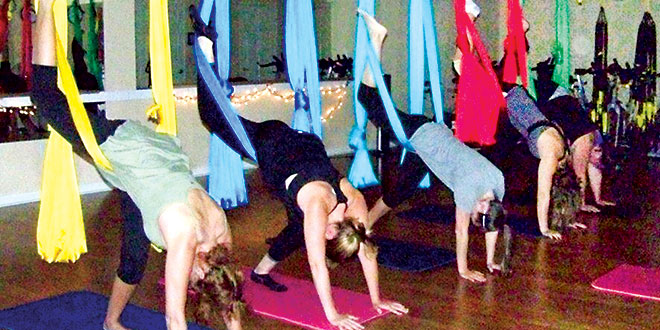 After becoming familiar with the hammocks and treating our bodies to somedeep stretching, the fun began as we slowly started the inversions.

As a child, I lived at the playground; the monkey bars were my favorite hangout. I would spend hours hanging upside down, flipping and contorting my body in and out of the crisscrossed metal structures. As I’ve gotten older, gravity and other unfortunate factors of aging have put a stop to my body’s ability to do what it once could, but my mind is always yearning for that freedom I felt as a child, leaving the ground and tumbling around in the air.

So when I heard about a new class called Aerial Yoga, I was beyond excited to try it. I set out to meet the woman responsible for bringing aerial yoga to Marco Island, 21-year resident Margaret Lamp, who said she first discovered it three years ago, when Kerry Tice, a trapeze artist and yoga instructor from Sarasota, ran a workshop at the YMCA in Naples. She immediately loved it, and began diligently training with Tice; her ultimate goal to eventually teach it herself.

Shortly after the workshop, she brought the idea to Marco Fitness and just recently, everything came together. She began her new aerial yoga class just two months ago, and is seeing great participation and success with clients ranging in age from 14 years old to 70 years old. As we spoke, she assured me that even with my back injury I would be able to reap the benefits her class had to offer. I like to stay active, but always have to keep things low-impact.

“This is no impact; it’s just sitting on the floor, doing your stretching, trusting your hammock and having a little fun,” said Lamp.

Drawn in by her extensive training and enthusiasm, I decided to go, not knowing 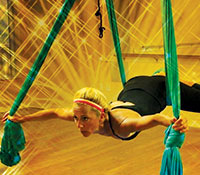 what to expect but approaching it with a nervous excitement, nonetheless.

After introductions were made, hammocks were assigned, and she dimmed the studio’s florescent lights, replacing their harshness with the warm ambiance of twinkling white Christmas bulbs strung around the room. She turned on the music, not your usual yoga fare, but instead a lively, yet soft “top 40” soundtrack for our workout.

The hammock, the centerpiece in this form of yoga, is a u-shaped contraption with two handles, anchored to the ceiling and made of a soft canvas-vinyl material. At first sight, it was reminiscent of a swing, but upon achieving my first savasana pose, commonly referred to as the corpse pose, it became my cocoon. I was a butterfly alone with my thoughts.

Lamp admits that quieting her mind long enough to sit still has always been difficult, so yoga is a challenge for her. She tells people that her class isn’t as quiet and serene as most yoga classes. It does provides serenity, but she likes to keep it from becoming boring.

“If people flip upside down, they’re having a good time, they’re proud of themselves and they giggle and laugh, I allow it; I don’t shush that. I like for them to be excited,” said Lamp. “That’s what I love; the excitement of the new things people are challenged by.”

At this point, I would like to say that this was by far, one of the most formidable fitness classes I’ve ever tried, not due to any inherent difficulty or excessive strain on my body but because of my own limitations. Regardless of my regular fitness regiment, I found out early on in the hour that I have very little upper-body strength and my flexibility is far 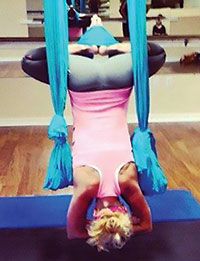 Achieving a comfortable inverted pose is made easy by strategically locking yourbody into the hammock.

from what it was in my days as a dancer. It was absolutely a great workout, and something I could see myself picking up very quickly as regular sessions would rapidly strengthen my body; and it was such great fun.

In comparison to traditional floor yoga, aerial yoga offers a deeper stretch and a fuller range of motion. It strengthens the core, stretches the hips and arms, and in general, allows one to work every part of the body. Lamp offers two different classes. Her half-hour, level-one class eases you into being able to trust the hammock without ever flipping completely upside down.

Her hour-long level-two class offers a more demanding workout with poses like the flying dragon, the mosquito, the butterfly, the lotus, the downward facing dog and the heart melting pose. She does slowly transition you into the inversions, but before the hour is up, you will find yourself thoroughly entwined in the hammock with your feet in the air and your head just off of the ground.

Thankfully, I found Lamp to be very attentive to each student. She said that she will only teach five people at one time so that everyone can be seen and helped when needed; the safety of her class comes first. She is considering adding a level-three class after the holidays for her clients that have expressed a desire to do even more. It’s that kind of drive and passion that she inspires in people and in turn, thrives on.

“I do this so that people can feel better about themselves and see improvement,” said Lamp. “They see the improvement, but I always see it far before they do. I just love that; it keeps me going.”