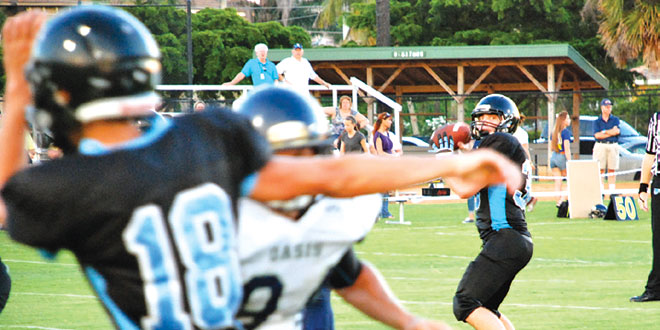 “It was a big success,” says Delgado. “The kids played a fundamentally sound game.”

In the last year, MIA has played Oasis three times, and are up on the Cape Coral school 2-1. Oasis struck first last August beating MIA 55-6. MIA has dominated the Sharks in the last two games, though, including a 35-7 thumping in the spring by the Rays.

MIA’s defense dominated from the first kick-off, knocking Oasis’ offense back 35 yards on its first drive. The Rays’ offense was ready, and early 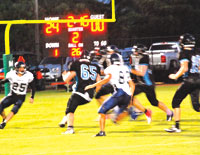 in the first quarter MIA led on the score board 10-0.

In all, MIA’s defense forced seven turnovers, three of which were fumble recoveries. Tyler Wallace (CB), Colby Jones (LB) and Jared Jackson (LB) each had an interception. Jackson’s last-minute fourth quarter interception went for 85 yards to end the game in a wave of hysteria at the Winterberry Park field. Top defensive props also go to Jonathan Kriqui (LB).

“I am definitely pleased with (the defensive) performance,” MIA Defensive Coordinator Adam Lowery says. “We were able to make a lot of game-time adjustments, and the kids really adjusted well. Colby’s interception was the result of some of those adjustments.” 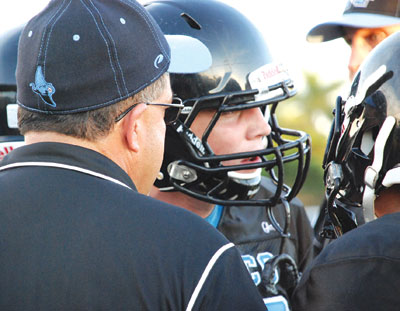 to Jonathan Kriqui (LB): “Jonathan was impressive. He was playing tough. He was looking for the ball every time.”

On the offensive side of the ball, precision route running was the name of the game, and Jackson (QB/RB) and Alex Excell (WR) combined for 150 yards with multiple touchdowns. Cole Stretton scored six points as well, and Jackson threw one up to Colin McMullen (WR), who responded with a school record 86-yard touchdown run.

This season, MIA has a secret weapon in kicker Anton Mertens Jr., who scored five extra points and field goal for a total of eight points. The secret: This is the junior’s first year to ever play football. Born in Germany,

soccer is Mertens’ expertise, but when his family moved to Marco Island last year, the MIA coaching staff jumped on the opportunity to have a kicking expert join the fold. He already is kicking 45-yard field goals in practice.

His parents Anton (Tony) and Inga Mertens are proud. “He is doing great,” says Inga. “Last year, he only wanted to play soccer, and after three football practices, he was hooked. He didn’t know anything about American football.”

Next on the Rays’ radar is Community School. The Naples’ football powerhouse will prove a formidable challenge for MIA, but the coaches and team are ready. In fact, 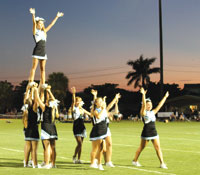 they have spent a lot of time this week preparing and watching film with The Huddle video service, which allows high school football teams to trade recent game films for study. It also allows coaches and players to create and upload practice and highlight films.

Delgado believes this preparation along with the team’s growth over the last year will help bolster its performance against Community School. The Rays have more than doubled the number of players on the team to include a roster of 30, which includes three seniors and three juniors.

“We are growing and establishing our program, and people are noticing,” notes Delgado. “We are a heavy underdog (against Community School), but we hope to give them a good game.”