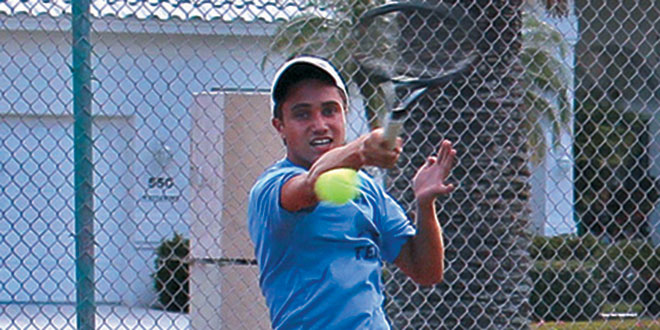 Raul Rodriguez smashes a forehand during practice for his state match.Photo by Roger LaLonde

When Raul Rodriguez picked up a tennis racket at age seven he was thinking about his cousins Alejandro and Carlos Perez who played in college, and for a short time on tour.

Rodriguez was a standout on the Marco Island Charter Middle School tennis team as they won championships each year he was on the team.

He chose Marco Island Academy over Lely to be with friends. He played on its first team four year ago. The team won one match as growing pains clashed with experience. He and Peter Servente, who graduated last year, were the team leaders.

For three straight years Rodriguez lost in the district finals.

Rodriguez lost but one match, going 9-1, yet the big test lie ahead in the Class 1A-District 10 tourney.

Could he win the singles? If he won singles it was an automatic ticket to the state championship.

In the finals he played Zach Schiller of Community School. Rodriguez started strong, winning 6-2, but Schiller dominated in the second set 6-0. In a tightly competed tiebreak Ramirez won 10-7.

“I was really committed this season to go to state,” he said. “I became the first MIA athlete to reach state in any competition.”

During the match he suffered cramps in his right arm and leg.

“I just couldn’t serve as well,” he said.

Rodriguez is looking into playing college tennis. He said there has been some interest, but nothing definite.

Looking back he credits his local instructor Bud Cox and MIA tennis coach Richard Kobleur. Both coaches spoke of Raul’s power, being able to hit a serve up to 110 mph.

“He (Kobleur) helped me a lot with good advice,” Rodriguez said.

Cox began coaching Rodriguez when he was 13.

“He completely changed my game to where I was playing really good, competitive tennis,” Rodriguez said.