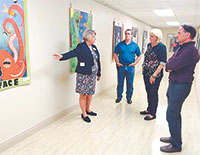 Enlightenment in the dangers presented by human trafficking has been part of the program for some Greater Marco Family YMCA summer campers.

About 25 sixth-through-ninth graders attending the Y’s Manatee Middle School camp recently took part in the ARTREACH program, which arms at-risk youths with information designed to prevent them from falling prey to traffickers, while also heightening the public’s awareness of the crime.

The week-long program’s uses the creative arts to educate youths ages 8-to-18 about trafficking, whether it involves prostitution, forced labor or another form of exploitation. ARTREACH’s full program is making its Collier County debut this summer, with the Y and PACE Center for Girls in Immokalee.

“It is a great program,” said Stephanie Pepper, the Y’s youth development manager. “It’s a great way for us to introduce what’s unfortunately happening now, without frightening the children. It gives them that awareness. They (ARTREACH) have a curriculum that seems to be very effective. It opens the children up, without them feeling ashamed or uncomfortable. Having that awareness is really important, as is kids knowing who they can go to and who they can trust.”

The program usually consists of five, two-hour-long sessions, but it was condensed to four days for the Y, which conducted the program July 5-8. Participants learned about modern day slavery, human trafficking and about the risk and vulnerability factors associated with human trafficking.

Next, they took the information presented by ARTREACH volunteers and instructors and discussed, and used it as the basis for 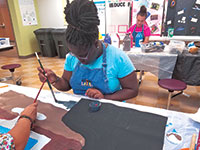 a painting, a photograph, poetry or even a skit. The youths had the freedom to fully express themselves artistically.

On July 8, their artistic endeavors will be on display for the public at the Marco Y’s youth development center. Set for 6 p.m. to 7:30 p.m., the free event includes a brief presentation by ARTREACH representatives, an opportunity to meet the artists and light refreshments.

Pepper said ARTREACH was a pilot project for the Y this year, one she hopes can be expanded in the future. “We hope to bring this to all of our service area for educating children and families,” she added.

Formed in 2006, HTAP is dedicated to preventing human trafficking in the region through education and collaboration with other organizations.

“Some people have called Southwest Florida a hotbed of human trafficking,” said Theiss. “That’s because we have both sex trafficking and labor trafficking here. The largest trafficking case in Florida happened here.”

She was referring to Operation Human Freedom, which saw 15 people arrested last March on charges stemming from a prostitution ring that was operating in Collier, Lee, Hendry, Polk and Miami-Dade counties. They were accused of smuggling women in from Mexico and Central America and forcing them to become sex slaves.

HTAP provides training and programs to individuals and organizations throughout the area, including two programs aimed at adults. Point of Contact Point of Rescue educates professionals in 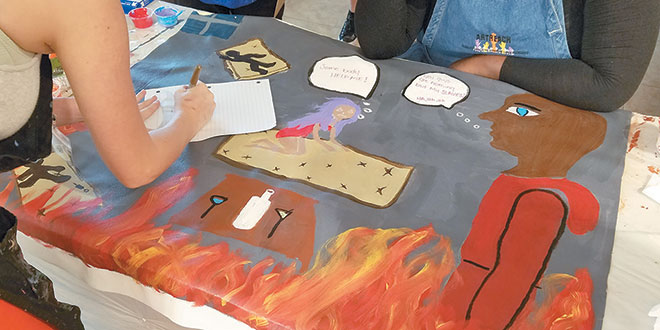 how to recognize possible human trafficking victims. Train the Trainer provides instruction in how to lead an ARTREACH program.

ARTREACH was created in 2010 when HTAP broadened its scope to include prevention programs for youths.

“The group that was most targeted in the state of Florida by traffickers, according to state agencies, was girls between 11 and 15,” said Theiss. “We thought, ‘Why aren’t we trying to reach that group?’ We want to reach the kids before they’re trafficked to teach them how to avoid being trafficked.”

She borrowed the idea of using the arts as an educational vehicle from a friend who’d used it as a universal means of communication while working with youths in Guatemala, where more than 20 dialects are spoken.

“That was the inspiration for doing it that way,” said Theiss. “I realized that everybody can look at art and put their own experiences into it and come up with a message that has meaning to them.”

Pepper said it’s tragic that families have to worry about the possibility their child could be targeted by traffickers.

“It’s also sad that in Collier County alone, so many children are trapped in human trafficking, no matter what type it is,” she added. “That’s the point of the gallery event is to educate the public and increase awareness so everybody can work together on stopping it.”