Put a Cork in It! 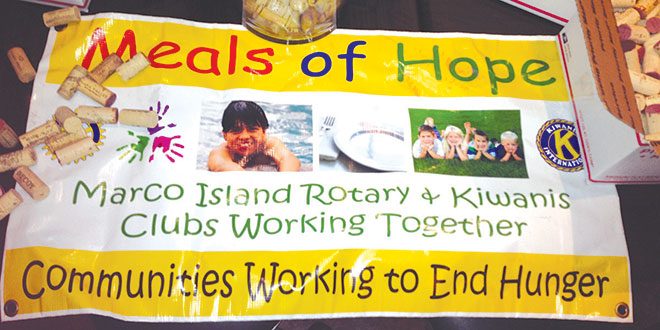 If you want to take a real life “hands on” approach to ending hunger, Meals of Hope is the way to go! This 501c3 organization was designed as a way for communities to come together to end hunger in their communities and beyond. So far, more than 22.5 million nutritious meals have been packaged and distributed.

Locally, Neil Snyder has been dubbed “Captain Hope” by fellow Rotarians as the man in charge of the Meals of Hope campaign. His wife, most recent president of the Kiwanis Club, also joins the effort. In fact, more than 500 community volunteers joined the effort last year to package 180,000+ meals at the Marco Island Charter Middle School gymnasium.

“It’s an enormous effort and one which this community fully supports,” said Synder. “We have all the schools represented, the Sunrise Rotary and Noontime Rotary Clubs, the Kiwanis Club, many area businesses, city employees including Fire and Police, the scouts, sports clubs and individual citizens, all come together to help.”

He added: “And one of the neatest things, it’s a multi-generational effort! From mothers with babies to the oldest members of the community, we get the mission done. That mission is to help 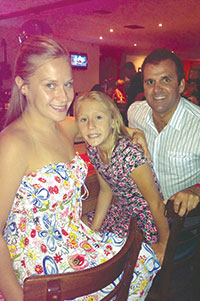 out the over 100,000 food insecure people in Collier County. These are people who may work, but are still making tough choices as to how to spend their money. Food, rent, medicine, utilities etc. There is not enough to cover everything, and they have to choose what to pay for. It is for these kids and their families that we march in our mission to end hunger in Collier County.”

According the Snyder, the packing starts off with the raw food ingredients and nutritional supplements and ends with packaging them in bags which each hold six meals. “What started off as a rice-and-bean-casserole-type dish now includes a couple different varieties including macaroni and cheese,” explains Snyder. “We use an assembly line approach and end up with boxes of meals we load onto trucks. The majority goes to local efforts like the Harry Chapin Food Bank and stay in Collier County.”

During the year, Captain Hope and his crew put on Meals of Hope Happy Hours to raise funds for the packaging event. Several have taken place this year at local venues such as CJ’s on the Bay, the Marco Brewery, Stonewalls, Konrad’s, Porky’s, the Snook Inn and the Old Marco Pub. Captain Hope 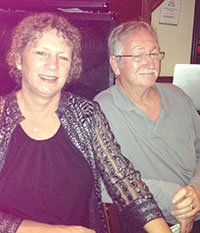 Sue and Tom Ackerson. Sue had the idea of collecting corks as an ongoing fundraising effort.

is well known for his ability to “rally the troops,” or as he calls them his “Hope Warriors.”

Sue Ackerson, local realtor and owner of the Old Marco Pub, decided to take up the cause by “putting a cork” in it, literally. Ackersom came up with the idea to gather and sell wine corks on Ebay as a fundraiser. “People use them in arts and crafts,” said Sue.

Old Marco Pub will save all of their corks, other restaurants like Outback Steakhouse have joined the effort as well. “We will also be announcing a ‘Korks for Kids Kompetition’ for whoever collects the most corks by November 15. All corks should be brought to the Old Marco Pub and Restaurant where we will package them up,” said Sue, who partnered with Erik Condee to get an Ebay listing up and running. Now, people can bid on boxes of 300 corks each. Old Marco Pub and Restaurant is at 1105 Bald Eagle Drive and can be reached at 239-642-9700.

Everyone should plan on attending the big packaging event at 8:30 AM on Saturday, Nov. 15, at the Marco Island Charter Middle School. Contact Erik Condee for more information at 239-389-3500. Snyder added, “It’s an uplifting experience you will never forget!”