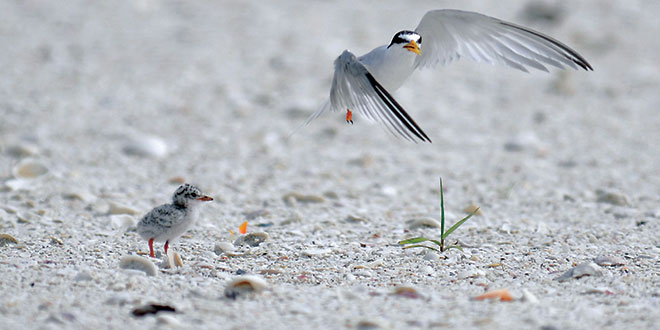 Least terns lay eggs in sand scrapes right on the beach. Eggs and young are extremely vulnerable to sun and heat when adult birds are flushed by people, dogs, or vehicles approaching the nest site. SUBMITTED PHOTO

Rookery Bay National Estuarine Research Reserve, in cooperation with the Flor-ida Fish and Wildlife Conservation Commission (FWC), has posted a small por-tion of beach on the south tip of Keewaydin Island and part of an emergent sandbar one mile southeast of Cape Romano to protect nesting habitat for least terns, black skimmers and Wilson’s plovers. These areas have been posted an-nually since 2001 to protect beach bird nesting season April-August.

“Protecting Florida’s wildlife and natural resources is our first priority,” said Rook-ery Bay Reserve Director Gary Lytton. “Taking steps to protect the least tern on Keewaydin Island during its nesting season will increase the likelihood of suc-cessful breeding and help preserve this and other threatened Florida species.”

Least terns are listed by the FWC as a “threatened species” in Florida, while black skimmers are listed as a “species of special concern.” Nesting areas will be monitored throughout the nesting season, and harassment or take of endangered or threatened birds, their eggs or young is a violation of State Law (Chapter 68A-27 F.A.C). Violators may be subject to criminal penalties. The attempt to take or possess any migratory bird, their nest or eggs is a violation of Federal Law (16 USC Sec.703).