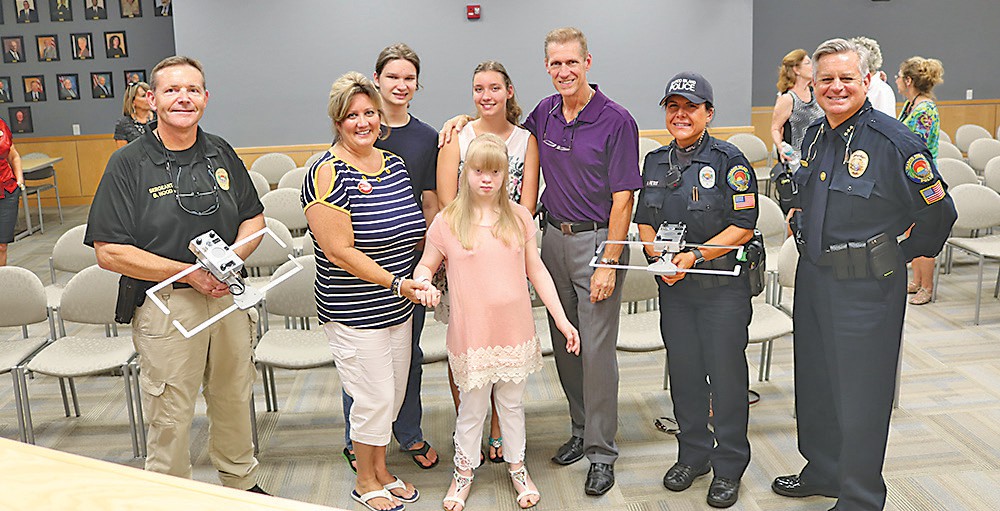 The realtors at Keller Williams on Marco Island donate time, talent and treasures in many ways. One such undertaking will assist local law enforcement to benefit all age groups and will help locate individuals who may have a habit of wandering away from home due to challenges beyond their control.

On Tuesday, May 16th the realtors from that office made a presentation to the Marco Island Police Department of two tracking devices which will help locate missing individuals.

“We do have some individuals who have gone missing due to issues concerning dementia, autism or Alzheimer’s,” said Captain Nick Ojanovac. Ojanovac heads the patrol bureau for the Marco Island Police Department, who will coordinate with the community as they bring the new technology onboard to track those that might wander off. “Already we have two officers trained on the devices. Officers Karie Petit and Paul Ashby have already been certified in the use of the new technology.

The Keller Williams Team became aware of the program known as Project Lifesaver through one of their members who has a daughter with Down syndrome who on occasion wanders away from home. On one of their daughter’s recent excursions she managed to be gone for several hours before first responders could locate her. However, this was not before she had incurred numerous injuries to her feet and legs. Those injuries required her to remain in bed for two weeks.

The Collier County Sheriff’s Office has deployed the technology for a number of years now, but the donation of the two tracking devices provided to the Marco Island Police Department by the realtors at Keller Williams will cut down on the wait time to bring a sheriff’s deputy to the island with a tracking device.

“In incidents such as these, time is not a friend,” said Ojanovac. Families who wish to avail themselves of this technology can do so by simply calling Captain Ojanovac at the Marco Island Police Department. He may be reached Monday through Friday at 239-389-5050 to set up an appointment.

Keller Williams donated two of the tracking devices, which are similar to a bracelet or watch. That bracelet typically would have to be purchased by family for the individual needing protection.

“We were very pleased to be able to partner with the Marco Police Department on this project and help those with special needs within the community,” said Sandi Sims, one of the realtors that made the presentation to the command staff at the department.