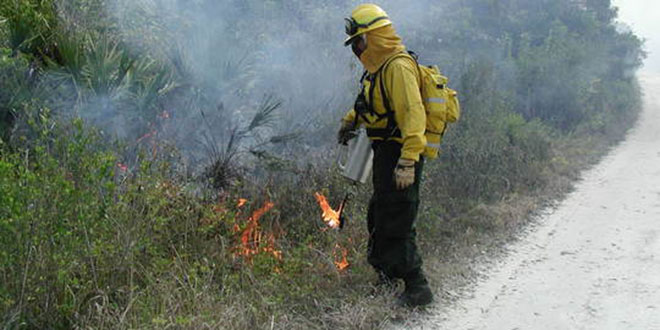 Rookery Bay Reserve staff coordinate burns with the Florida Forestry Service and work with partnering land managers and local fire departments to get the job done safely and efficiently.

Residents in the adjacent areas will see and possibly smell smoke from the fire. Fire personnel will contact visitors in the area to ensure their safety while traveling near activity areas and will carefully monitor the fire throughout the day until it extinguishes.

According to Carter, a major portion of Collier County is comprised of plants that are dependent on fire to maintain species composition and diversity. These species are the same as those that are prone to lightning-strike wildfires and the controlled reduction of those fuels will prevent catastrophic wildfire damage. Fire-dependent plants include the South Florida slash pine, gallberry, saw palmetto and scrub oaks.

There are a number of reasons why prescribed fire is used as a management tool in natural areas, which include: