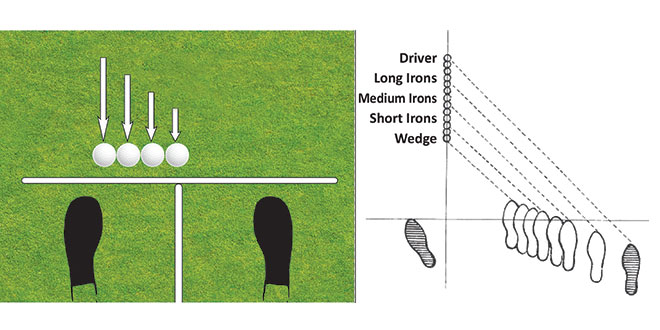 A (left) and B. SUBMITTED PHOTOS

Ben Hogan, one of the greatest golfers every to live, wrote a book called, “Five Lessons: The Modern Fundamentals of Golf” in 1957. This book is relevant to this day. The golf industry of today has radar systems, launch monitors, high speed cameras, balance boards and many other technological devises that confirms Hogan knew what he was talking about.

As most good players in Hogan’s area, he grew up working at a golf course as an Assistant Golf Professional and caddie. The good players were students of the game, and gave lesson at the local country club to make a living. Many tour players today are only students of their swing coach, but do not study the game enough to become teachers themselves. No one blames them; they make money enough playing the game that they do not need a job on the side.

I will read Hogan’s book at least once a year to revisit the classic fundamentals of the game of golf. The book is the bestselling golf instructional book ever written. However, Hogan did cause one debate among golf instructors, and that was his theory on ball position. Hogan and many other golf instructors of past and present believe in “constant ball position.” Constant ball position is always having the golf ball equal to the left chest at address or just inside the left heel. The right foot moves to the right for a wider stance when progressing to longer clubs in the golf bag, but the ball in relation to the left chest or left heel never changes as seen in picture A.

I always tell my students as golfers we need to have one swing, and the only thing that changes is ball position. This will help create consistency, and consistency is the key to getting better at the game of golf. Go see your local PGA professional to see if you have the correct ball position for each club in your bag.

Todd Elliott is the PGA Head Golf Professional for Hideaway Beach. Todd is TPI (Titleist Performance Institute) Certified as a golf professional. This gives him the ability to give golf specific physical screening to detect any physical limitation that might affect the golf swing. Todd is an active Student Mentor at FGCU; a volunteer with the First Tee program and was presented the 2010 and 2011 PGA’s President Council Awards on “Growing the Game.”