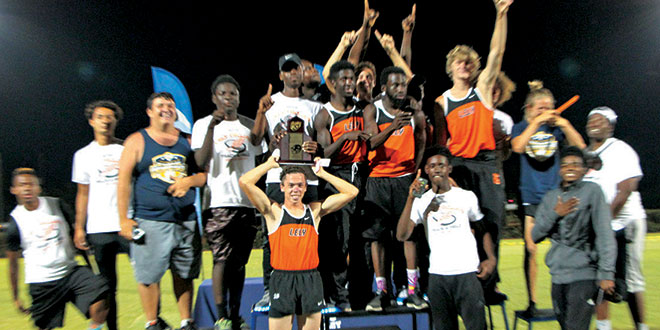 There were just two Lely medalists at the FHSAA Class 2A State Track & Field Championships over the weekend, but the boys and girls teams did shine on their way to the title competition.

The Lely girls won the Class 2A-District 10 competition and the boys came back the next weekend to win the Class 2A-Region 3 title.

The Lely girls competed in five events, the boys in eight at the state Class 2A championships on May 6 and 7.

“There were a lot of good possibilities and the kids did a good job of competing,” coach Mark McGarity said. “I think overall we peaked last week

in getting many state qualifiers and it was hard for them to come back against very strong competition.”

The top eight finishers in each event earned a medal. Mallory Bell had a personal best of 9-feet-6 inches in the pole vault for eighth place. Wadson Joseph placed eighth in the high jump.

Bell missed out on a medal in the 800 meter run, coming in ninth. Bell, Emma Fernandez, Katie Schiller and Rosie Poling ran to a 10th place finish in the 4×800 relay. Poling was 16th in the 1,600. Laura Liberiste was 10th in discus. 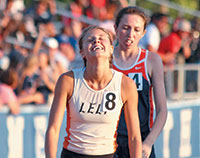 Mallory Bell is spent, but happy after placing third in the 800 meter run, qualifying her for the state championship.

run. He teamed with Cody Demalavez, Bobby Garcia and Kole Bartos in the 4×800, finishing 10th.

Of the qualifiers only Katie Schiller and Wesley Solomon are seniors.

“When the season started I thought we had some good possibilities to compete at state,” McGarity said. “We have a bunch of young kids that gained experience (in district, region and state),” he added. “It should result in the team being pretty positive looking ahead.”