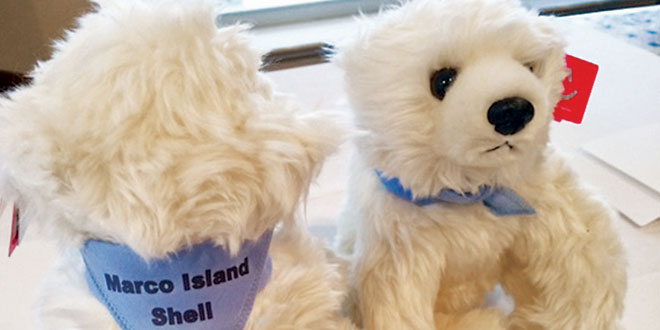 Cuddly stuffed polar bears are now available to purchase and will be handed out to children in local hospitals. Sponsored by the Marco Island Shell gas station, these soft, plush bears will comfort children who are patients. The proceeds of the bears are being donated to a general fund for research, services and treatments by the Marco Island Chapter of the American Cancer Society. Having cancer is a bear for anyone, especially for children. Sponsoring a bear will help ease the pain.

The polar bears are in keeping with this year’s theme for the 2015 Imagination Ball being held February 28th in the ballroom at the Marco Island Marriott Beach Resort. The Imagination Balls theme for Marco Island’s prestigious gala event is “Break Through…Find a Cure”. BMO Harris Bank is the returning Presenting Sponsor.

The polar bears can be purchased now through February 28th at BMO Harris Bank, Marco Island Florist, and the American Cancer Society.

For information on the polar bears, remaining sponsorships, Patron tables and to attend the 2015 Imagination Ball, please contact Sue Olszak at the American Cancer Society at 239-642-8800 Ext. 3890, or by email at Sue.Olszak@cancer.org.