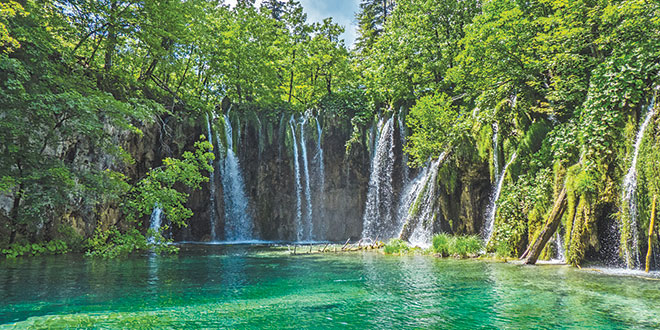 Sometimes the pools of water are emerald in color.

AUNESCO World Natural Heritage Site, Plitvice Lakes in central Croatia near the Bosnia Herzogovenia border is the crown jewel of the eight national parks in this country. The most visited site in Croatia, it is about a three hour drive from Split, two from Zagreb. There are public buses as well as organized excursions from these two cities to the park. When touring Croatia, a visit to the Lakes is a pleasant break from cities, churches, and ruins.

We had heard that Plitvice Lakes was beautiful, but were initially somewhat blasé about our visit. Lakes and waterfalls. Yeah, we’ve been to many national parks with lakes and waterfalls. That indifference changed once we started walking some of the trails in this park. I don’t know if there are enough superlatives to de-scribe the seemingly never ending cascades of water and incredibly clear water; emerald in some places, deep turquoise in others. Stunning. Spectacular.

The waterfalls are not one big, impressive cataract such as Niagra Falls. Rather, as one traverses the parkland visiting some of the 16 terraced lakes, there is a series of falls and cascades of all shapes and sizes that connect the lakes. Turn a corner and another surprise awaits.

Located in what is known as the karst area of Croatia, the 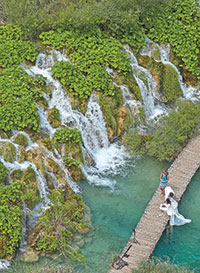 This bride chose a beautiful location for photos; but did she really want to dunk her train?

falls are the result of travertine, or tufa. I’m not even going to pretend I understand much less can ex-plain karst hydrography other than to say it is a geological term referring to po-rous carbonite rock. Travertine, a form of limestone, is the porous rock that is formed from the sedimentation of calcium carbonate in water. The result of its buildup called barriers is the waterfalls; its constant dissolution and augmentation causes water to change its course and over time the waterfalls change. Moss, algae, and bacteria figure into the mix, but I’ll leave that for biologists to explain.

To really see and appreciate the park, there is much walking involved, often on uneven wooden boardwalks and bridges. Shuttle trams and boats spirit visitors to different areas and it is possible to take a shuttle, do some walking and then take a boat for more trails. Some of the waterfalls are viewed from below or above, others are right on the trail; the feel of refreshing spray is not unusual, but can af-fect a camera lens!

There is said to be quite a bit of wildlife in the park, including bears, wolves, foxes, deer, and boar. However, staying on the well trodden trails, we saw no wildlife except for some of the more than 160 different species of birds and

many fish in the crystal clear water. We also heard may frog choruses. There are more than one thousand different types of plants in the lush forests of the park includ-ing 55 species of orchids.

Trails have letter names, but the signposting and maps on the back of the entry tickets are not the best. A better map can be purchased at one of the ranger sta-tions. Every guidebook seems to recommend a different way to tackle the park and move among the twelve upper and four lower lakes. We walked from En-trance 1 to tram station 1, took the tram to stop 3, walked trail E to a boat station which took us across the lake where there is a trail past the “Big Waterfall” back to entrance 1. A park ranger told me that daily there are people who take a wrong turn on a trail and end up not where they wanted to go, so if you visit, make sure you have your pathway mapped out ahead of time. Depending on the route cho-sen, the walking will be uphill or downhill and there are pros and cons to either plan.

There are two entrances to the park with a few hotels and restaurants outside these entrances. There are amenities including restrooms, ranger stations, and food kiosks at 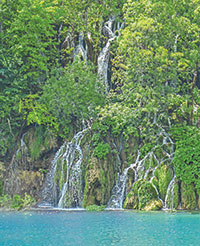 Waterfalls cascade down into pools of turquoise water.

the entrances and some of the major tram and boat stops. Visitors should allow enough time to explore the park; a tight schedule would be frustrat-ing.

As an historical side note, the first casualty of the Balkan Wars occurred at Plit-vice Lakes. In 1991, the Serbian army occupied the park, probably not for its beauty but possibly because of an important road that traversed it. Croatia did not yet have a standing army, so police from the Ministry of Interior entered the park to try to take it back. Shots ensued and one Croat policeman and one Serb were killed. Driving to the park on local roads, abandoned and burned out houses from the war are still evident.

If traveling to Plitvice from Split or Zagreb, just off the main road in the town of Turanj, south of Karlovac is an open air “Museum of Arms from the Homeland War.” Set among the ruins of bombed out buildings, there are armored tanks, weapons, and other relics from the war including a MiG-21bis aircraft displayed dramatically jutting up from the landscape and the remains of one that was shot down.

One of the first to research the area that is now Plitvice Lakes National Park was Professor Ivo Pevalek who said it best: “There are water, lakes, waterfalls and forest elsewhere, but Plitvice Lakes are unique.”