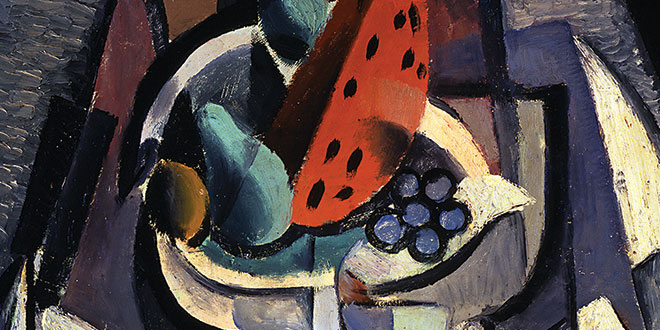 In 2012, I wrote about the unique Dalí Museum in St. Petersburg Florida (www.coastalbreezenews.com/2012/03/22/in-search-of-dali/). If you haven’t been there yet, or even if you have, between now and February 16, 2015 is the time to plan a visit in order to see the special exhibit “Picasso/Dalí Dalí/Picasso”.

A monumental undertaking, this exhibit affords the opportunity, for the first time, to explore the relationship of these two masters by viewing their works side by side. Organized by The Dalí and the Museu Picasso in Barcelona, in collaboration with the Fundació Gala-Salvador Dalí, this special exhibit brings together rarely loaned works from 22 international art museums and private collections.

Born in Spain a generation apart, Picasso in 1881and Dalí in 1904, their personal relationship, described as love -hate, is like something out of the tabloids. Picasso first served as a quasi mentor to Dalí, but in time they became rivals both politically and artistically.

They first met in 1925 when Picasso, who was already acknowledged in the art world, attended Dalí’s first solo show in Barcelona. Dalí traveled to Paris the next year to visit Picasso. He purportedly told Picasso 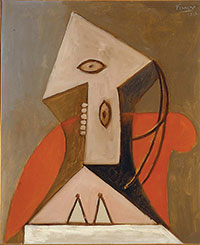 that he rushed to see him even before going to the Louvre to which Picasso is supposed to have said “That was very correct.” Picasso financed Dalí’s first trip to the United States. It is said that Dalí’s beloved wife, Gala, had a prior liaison with Picasso.

Both men reacted to he horrors of the Spanish Civil War (1936-39) with evocative works. Soon after that, with the rise of Fascism, their political views diverged. Picasso became very political. He left Spain and refused to return until Franco was deposed. He joined the Communist party in 1944.

Dalí refused to take a political stand against Franco and Fascism and this was one of the reasons he was expelled from the Surrealist movement. Although he went to the United States during World War II, he did return to Spain under Franco’s regime and was viewed as a supporter of the dictator.

In later days, Dalí, who once called Picasso his “artistic father” referred to the senior’s work as “ugly” and accused him of killing modern art; Picasso was equally critical of Dalí.

Arranged chronologically, the exhibit at the Dalí Museum explores the influence, similarities, 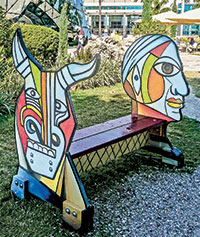 To commemorate the extraordinary exhibit Picasso Dalí Dalí Picasso this bench inspired by the two artists decorates the garden area of The DalíMuseum. PHOTO BY VICKIE KELBER

and contrasts between the two. Visitors are greeted by giant ManRay photographic portraits of the artists. On the opposite wall, self portraits of the two present the men as the images they want to convey.

In many of the pairings – portraits of women, bathers, still lifes, collages, their parallels are notable. The early influence of Picassso on Dalí is apparent in shapes, lines, colors, faces, positioning of subjects and objects in paintings. In early Cubist works, Dalí’s emulation of the older master is evident, but soon he began to impose his own unique style.

Their representations of the horrors of the war are presented in Picasso’s sketches for Guernica, his signature work, which are displayed next to Dalí’s study for Premonition of the Civil War, his view of the self cannibalization of Spain during its Civil War.

Both men were fascinated by Velazquez, the great 17th century Spanish painter and their reimagining of and tributes to his work occupy two walls in one of the galleries.

Representative of Dalí’s final attitude toward Picasso is his Portrait of Pablo Picasso in the 21st Century (1947). Picasso is depicted as hermaphroditic with no 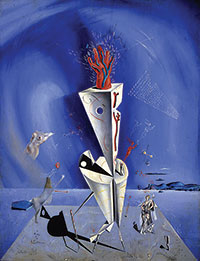 brain, rocks on his head and a grotesque spoon symbolic of a paint brush protruding from his mouth.

Included in this special show are various print media; magazines, pamphlets, books illustrated by these two artists. In the 1930’s, both designed covers for the magazine, Minotaure; Picasso in 1933 and Dalí in 1936. Both covers explored the repugnance of human violence via the half man half bull creature as a symbol. There are also postcards written by Dalí to Picasso. Picasso never responded to these correspondences, yet he thought enough of them to save them.

One article stands out by itself and adds a bit of amusement. It is Dalí’s Aphrodisiac Dinner Jacket. Occasionally worn by the eccentric and flamboyant Dalí, it is decorated with, among other objects, 55 shot glasses filled with a green liqueur. When originally displayed in Paris in 1936 in a slightly different version, each shot glass contained crème de menthe and a dead fly; people were invited to sample the liqueur through straws. Dalí noted that the dinner jacket should only be worn during “certain promenades late at night, or in very powerful cars going very 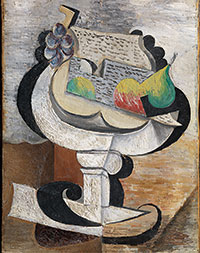 Picasso Commpoteir Frutero Fruit Dish – (1917) © 2014 Estate of Pablo Picasso / ARS, NY. This exhibi-tion was organizedby The Dalí Museum and the Museu Picasso, Barcelona, with the collaboration of the Fundació Gala-Salvador Dalí and is supported by an indemnity from the U.S. Federal Council on the Arts and the Humanities.

slowly”; obviously, so the liqueur would not spill.

The Dalí Museum is located along St. Petersburg’s picturesque waterfront. Advance tickets are available for this exhibit and timed tickets offered on weekends. The museum can be visited on a day trip from Marco, but consider an overnight to spend time enjoying what has become the art district of St. Petersburg, with its Museum of Fine Arts, Chihuly Collection, galleries, shops, and restaurants, all within walking distance. There is also a trolley, “The Downtown Looper”, that stops at all the major museums and attractions.

If you want to see this exhibit after February, 16, you will have to travel to the Museu Picasso in Barcelona where it will be from March 19- June 28. May is a lovely time to visit Barcelona.