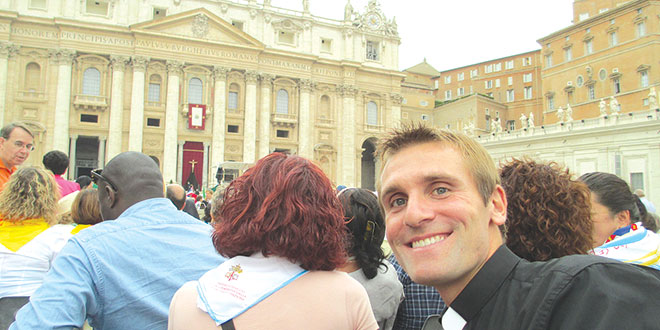 For those who like to travel, Italy on the itinerary is thrilling. Most of us will be fortunate enough to have the chance to visit St. Peter’s Square in Rome once in a lifetime, let alone catch a glimpse of the Pope. Imagine, San Marco Catholic Church and the Diocese of Venice, Florida, encouraging young Marco Island resident Peter Vale to pursue his religious education at the Vatican in Rome. It must take a very special young man to receive such an honor.

It’s inspiring this vibrant man of 30 years of age chose this path. How fortunate to find someone in today’s age of computers, smartphones and big screen televisions interested in becoming a seminarian. Who better to spread the message to young people than a young person?

We had the opportunity to ask Peter a few questions about his life studying at the Pontifical Gregorian University (Rome) and what led him on this path.

Q: Tell us a bit about your childhood and family life. How did you get to Marco, and what inspired you on your path?
A: I was born and raised in Sudbury, Massachusetts, the second-oldest of nine children. Having attended public schools through eighth grade, I decided to enroll in St. Sebastian’s School in Needham, Massachusetts, for my high school years. From there, I continued my studies at Harvard, where I majored in Scandinavian Studies (as an offshoot of Linguistics). While in college, the family relocated to Marco Island, and I followed them down there upon graduation.

Q: How does one get from teaching at St. John Neumann to working and working/studying at the Vatican? Ed Valvano, a parishioner at San Marco Catholic Church mentioned that it isn’t just studying, but that you’re working in a high position. What position? For how long?
A: After graduating from college, I worked with my dad in commercial cleaning and then real-estate (having acquired Florida Real-Estate and Mortgage Broker licenses). Not 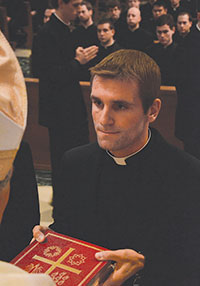 Installation as a Lector

finding that work tremendously fulfilling, I was drawn to teaching. I filled in periodically as a substitute teacher at the Marco Island Charter Middle School and simultaneously worked toward receiving my state certification in Middle Grades Integrated Curriculum, as well as Spanish K-12.

I had difficulty finding a full-time teaching position in the Collier Public School System, and a friend suggested that I explore St. John Neumann Catholic High School in Naples. I applied, only to be told that they were not in need of a Spanish teacher. Given the fact that I had taught religious education at the parish level for nearly 10 years at that point, I was informed that there was a position open in the Theology Department. I thought it over and decided it would be a great fit!I cannot tell you how much I enjoyed myyears teaching Theology at St. John Neumann Catholic High School! I taught 9th, 10th and 11th graders in everything from morality to Church history. Here’s the interesting thing however: In preparing my lessons and being in constant contact with that type of material, it reawakened in me a desire to become a priest — which was something I had considered and briefly explored since I began altar serving in the fourth grade. Now, this desire became that much greater. I decided to speak with Bishop Frank J. Dewane, and he wisely pointed out that there was only one way to find out.

As a result, I entered St. John Vianney College Seminary in Miami in August 2011, where I attained a second Bachelor’s Degree in Philosophy as part of the Pre-Theology program there. Shortly before graduating, Bishop Dewane offered me the tremendous opportunity to study Theology in Rome. I am currently in my first of four years here, living at the Pontifical North American College with 250 other American seminarians and studying at the Pontifical Gregorian University with thousands of students from

across the entire world. God willing, I will be ordained a deacon in October 2016 and then a priest in June 2017.

Q: What message would you like to give to the youth in the church today? What would you like to impact the most locally?
A: I suppose that the one message I would like to give to the youth is to find your place in the Church and live out your faith in a way that is true to who you are — without fear or compromise. We are called to live holy lives, but this has to be done with freedom and joy. I really like how Pope Francis recently put it: “Follow Jesus more closely, without losing hope in his promises and without losing a sense of humor.”

Q: How do you foresee transitioning back if you return? Would you become a priest? What are you studying?
A: When I return to the Diocese of Venice, I really look forward to putting all of this to use in the parish. A priest has the privilege of being with the people in all of life’s joys and trials, and to me, there is nothing more exciting or rewarding!

Q: What is your average day like? Do you have any advice for people planning to visit? Little known things you’ve learned since being there?
A: Life in Rome has been incredible, and I still find myself in disbelief when making the five-minute walk down to St. Peter’s Basilica to pray or passing the Trevi Fountain on my way to class each morning. It is a true blessing to be able to see the universal church at work first-hand and to be in such close proximity to Pope Francis! Of course, it’s not all sight-seeing and excursions, and we follow a regular schedule between Theology classes and community prayer. That being said, I have been avidly exploring the city in my free time and

have come across some pretty amazing things — which Rome seems to be just full of! One neat (and rather bizarre) example is a small Capuchin crypt that has been mysteriously decorated with the bones of nearly 4,000 friars (everything from archways to chandeliers). Only in Rome!

Q: What unique challenges do you face studying abroad?
A: Living and studying abroad certainly poses its challenges, and the main one would be the distance from family and friends. I had previously done foreig exchange experiences in both Sweden and Ecuador, but neither for this long. Given my Italian heritage, it hasn’t taken much getting used to the culture and cuisine, but the language has required a little bit of work, especially since all of my classes are in Italian. However, it certainly opens up some amazing doors and is just a lot of fun to speak. Life over here also requires getting used to the laid back Italian way — and especially remembering that shops are closed for several hours in the early afternoon!

Q: What would you like to share with the readers? Is there anything in particular you would like them to know?
A: As cliché as it sounds, I think that the biggest message I would like to convey is to simply follow your bliss — regardless of what the rest of the world thinks. There’s a quote by Thomas Merton that I’m quite fond of: “The logic of worldly success rests on a fallacy: the strange error that our perfection depends on the thoughts and opinions and applause of other men! A weird life it is, indeed, to be living always in somebody else’s imagination, as if that were the only place in which one could at last become real!” Simply put, in being ourselves, we will be truly happy and make the positive contribution to the world — whether as a priest, nun, teacher, doctor, lawyer, etc. — that God intends for us.