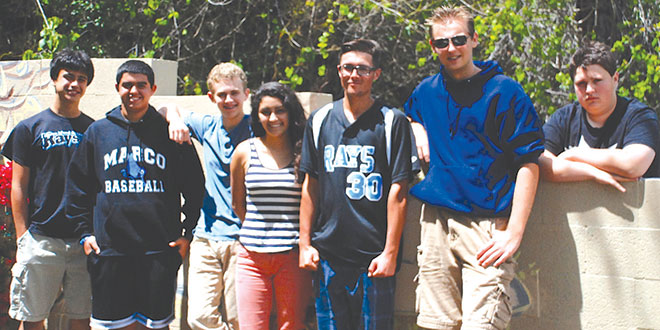 Ask most people on Marco Island who Bill Miltz was, and one might hear that he was a Cleveland, OH, native who loved the Indians and the Browns, a multi-faceted businessman, a seasonal resident. In 2013, he retired from his position as CEO of JGB Distributing Inc., the largest distributor of Invisible Fence brand products in North America.

Ask the faculty, administration, parents and students at Marco Island Academy about Miltz, and they will sing his praises as a major player in the establishment and development of Marco’s charter high school. He served as the director of development for MIA.

“He loved the school and had a passion for the kids,” said MIA Chairwoman Jane Watt. “He was one of those hugely successful businessmen who really cared about kids, and he was an incredible man. He was here part-time, and was very supportive of education because he felt he owed his success to his education.”

In fact, Miltz was so instrumental to MIA that after his sudden death on Aug. 5, 2013, school officials decided his contributions should be memorialized somehow on the San Marco Road campus. The result was a student-led project to construct a memorial garden and wall in tribute to Miltz.

“Right after he passed, it was really hard,” Watt noted. “He had been so instrumental to the school, and we wanted to do something permanent.”

The entire garden and wall structure was engineered, designed and completed by MIA engineering and are students, with new Principal Melissa Scott overseeing the project. Students worked tirelessly for about six weeks — before and after school and on the weekends — to complete the project in time for the March 21 dedication and ribbon-cutting ceremony. They received support and donations from a number of Marco-based businesses and dedicated

The completed garden was dedicated to Bill Miltz on March 21, with his widow, Annie Groves-Miltz, and family in attendance. Liv Lenhoff painted the mural.

The project was made more challenging by the location chosen for the garden: a vacant alcove on the west side of the campus with uneven terrain and filled with dirt, branches, leaves and a dead tree. Watt explained that the site was chosen by MIA Vice Chairwoman Dawn Vergo, as she and Vergo walked across the campus one day. The two women felt the breeze and heard the rustle of the leaves and knew this was the location for Miltz’s garden.

“The project grew organically,” Scott said. “Everyone had input into it, and the kids drafted every step. They did five blueprints for the project. It was just as much mental work as physical work.”

The garden consists of a cinder block wall made of more than 300 blocks, lush landscaping, a paved pathway, benches and a bridge. The students had to clear and level the land prior to mixing concrete and constructing the wall, installing the irrigation system, laying the pavers and planting the sod and landscaping.

As it came down to crunch time, parents and local businesses helped out, donating time, money and materials to get the job done. AndrewHunter Homes built and installed the bridge, while Irrigation Concepts LLC donated and installed the irrigation system for the garden.

“One week before the ceremony, we had no footers, no path, no pavers, brown sod, no wall, and the kids were under constant stress,” admitted Scott. “But they never gave up. They worked every single day, and put in more than 200 hours of volunteer work.”

“We had a vision, and the kids met it and exceeded it,” she added. “it would have been very hard to put together a more perfect team.”

Check out the construction of the garden on youtube.com. Search for “Marco Island Academy Memorial Garden Project 2014.”