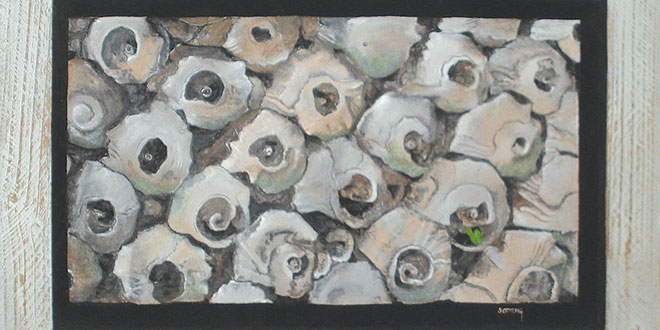 Second Place: Pete Sottong’s acrylic on hand-carved wood block relief depicts oyster, clam and lightening whelk shells. They were among the bivalves and other marine life whose shells were used in the mounds constructed by the Calusa Indians, Marco’s Island’s original inhabitants.

Southwest Florida’s days as a frontier outpost is the subject of a new art exhibit at the Marco Island History Museum.

Entitled “Painting SW Florida History,” the show depicts life in Collier County from the late 1800s to the 1920s. The artworks tell the stories of settlers like Tommie Barfield, who arrived on Caxambas with her family in 1902; W.T. Collier, who settled on Marco in 1870; and Barron Gift Collier, who bought large tracts of Lee County in the early 1920s. 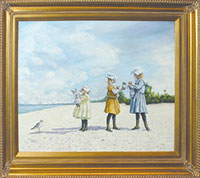 Third Place: ‘Girls and Dolls,’ in which the artist, Inez Hudson, poses the question, ‘Would the dolls be replaced by cells phones in today’s photo?’

Linda Chambers of Marco captured first place. Pete Sottong of Naples took second, and Inez Hudson of Marco placed third. They will have the opportunity to show their work as a featured artist in the museum’s gallery at a later date.

The original creations of 24 artists from Collier and Lee counties comprise “Painting SW Florida History,” which is put on by the 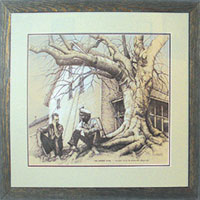 First Place: Linda Chambers’ pen and ink creation, ‘The Watson Home.’ The home was built by Ed Watson during the 1890s on the Chatham River in the 10,000 Islands. It was razed during the 1960s after being damaged by Hurricane Donna. PHOTOS BY DON MANLEY

MIHM and the Marco Island Foundation for the Arts.

Visitors will have the opportunity to vote for their favorite painting of this art show until March 1, when the People’s Choice Award will be announced.