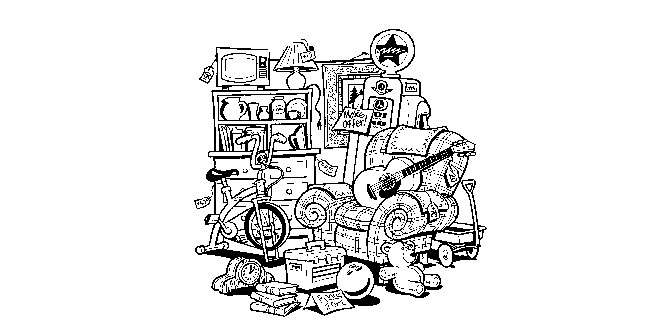 Many people like to accumulate things, and at a certain age, find they have amassed what looks more like a jumble than an organized collection. For some, it represents the inability to throw things away, fearing these items may be of use one day; while for others, it’s the inability to say “no” when someone drops off yet another homeless cat on the doorstep.

At any rate, hoarding exists and seems to be more prevalent, or perhaps just more noticeable, than it used to be. The media — television in particular — finds it interesting enough to run complete shows about it, boldly doing the laundry of these poor folks and hanging it out to dry in the public eye. Human nature has always shown a perverse interest in other people’s business from eavesdropping to opening others’ mail, but taking a camera into a house crammed with everything from newspapers to clothing and microscopically examining the personalities responsible for housing wall-to-wall and floor-to-ceiling trash, seems a little over the top.

It doesn’t stop there. Since these poor creatures’ lives are so out of control — in many cases they have not seen their kitchens or bathrooms in years and as a result — those rooms may be inhabited by mold and roaches by the time they are uncovered. We can only imagine in our wildest dreams how they are managing to attend to the necessities of life.

Those who house unhealthy numbers of animals seem to be attracting a lot of local attention lately, as concerned neighbors report them to the appropriate agencies. It’s as dangerous for the animals as it is for the safety of the humans that try to give them shelter.

It’s not surprising that the hoarders are visited by psychologists specializing in the topic; it’s only surprising that the professionals can manage to keep looks of pure disgust off their faces or manage not to gag as not only evidence of but also live bugs and rodents often scurry around and the occasional ‘lost’ pet is found mummified on the premises.

So what do you collect, and where do you draw the line between collecting and hoarding? As you walk from room to room (if you are still able to move freely) admiring your objects, have you considered their value or just how much of your living space they fill? Does the collection get in your way or prevent you from doing something else? Do you enjoy each piece individually, or just glory in having a large collection of dusty items that you rarely examine? Does the collection have real value, or has it been only an interesting hobby to you? What will become of it when you are no longer around? Will your heirs want it, continue collecting, or search for the quickest way to get rid of it? How many pair of shoes, handbags, ties or dinner jackets do you have in your closet? How many do you use regularly?

Many people leave huge stamp collections, and find none of their relatives or friends are interested in having them. As for knickknacks, you might as well donate them to charity today than hope your heirs will adopt them. Most people don’t want the responsibility or work required to maintain silverware, nor do they appreciate fine china and crystal. Beautiful household items seem to be what newlyweds collect and feel they must have, but never use. They are like the large family rooms they insist on having in a first house to “entertain,” but never use for that purpose.

Many of the hoarders made public by television got their start with one or two stuffed animals or perhaps some pieces of plumbing or machinery they thought might be vital one day or some books they simply couldn’t give away. Many subsequently bankrupted themselves as they continued to invest in their passions, which essentially consisted of useless objects. Perhaps they were more comforted by being surrounded by things they loved than in things they needed, as they slowly became buried.

What you collect is unimportant — take the time to consider why and how you do it. Many of us are guilty of being pack rats with more possessions than we need and closets that embarrass us. But we are far from being hoarders whose clutter has taken over our living space. So just let the dust bunnies out of their cages, and as I do, make them swear a confidentiality agreement about when they were last confronted.