Our Veterans: From Sea to Shining Sea 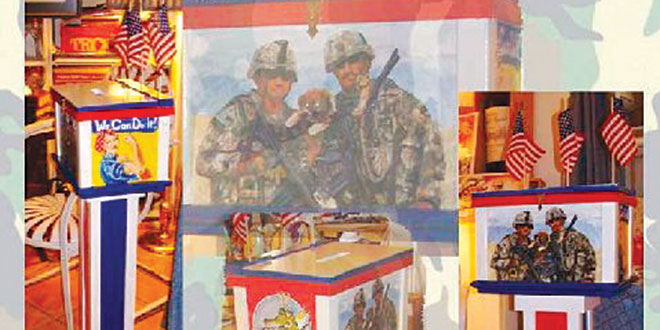 In May, Malenda Trick made a big announcement about a new Veterans’ Day project during the Marco Island Foundation for the Arts annual Scholarship Awards Luncheon, and now, that project will become a reality.

Beginning Tuesday, July 15, Trick will be painting historical images of our nation’s valiant soldiers at war on an 18-foot-long, double-sided memorial canvas wall at the Marco Island Historical Museum. She will paint images of our Florida soldiers at war on one side and our national efforts on the other. The memorial will depict Trick’s impression of images captured during wartime, commemorating our war heroes’ valor. The visitor will see emotional, epic stories told in impressionistic renderings through the artistic eye of Trick. This contemporary work of art will forever allow remembrance of those that risked it all to keep us free.

This will be Trick’s third Veterans’ Day project. Previously she painted 35 veterans’ portraits in Southwest Florida (2012) and Sarasota (2013), which were widely viewed all over Southwest Florida and the Sarasota area. The new endeavor will begin with 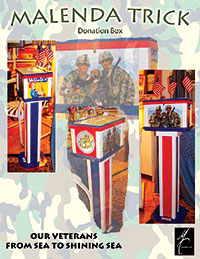 a special reception on July 15 at 5:30 PM at the MIHM. The public is invited to participate by submitting action photos to be considered for inclusion in the project. They also will be given the opportunity to sponsor this worthy project by donating $25 and being invited to sign their name (if a soldier) or their soldier’s name on the memorial. The project will be used to raise funds for various veterans charities.

Trick will paint at MIHM from 12-3 PM on Tuesdays, Thursdays and Saturdays until the canvas is complete, which could be in six weeks time. The public will be allowed to watch her paint at the museum as she progresses and also on the web camera to be announced soon. Her effort will also be documented on video and still photos.

The memorial wall will be veiled after completion and then will be unveiled in a ceremony on Nov. 11, at 5:30 PM at the Marco Island Historical Museum, in front of veterans, local, state, and federal officials and the public.

For more information about the project, contact Kat Nimtz Rinaldo at 201-960-0203 or by email at mermaid.kat@hotmail.com.