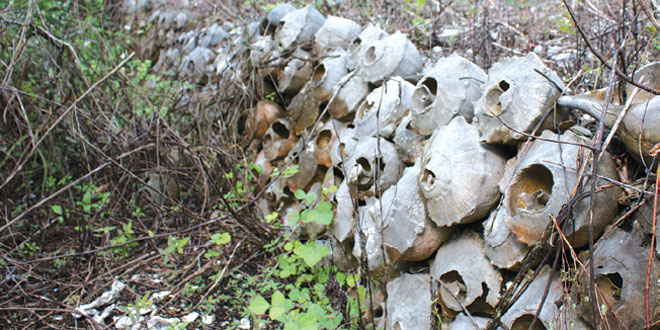 On September 11, Marco Island’s Environmental Specialist Nancy Richie and Alexandra Sulecki, Coordinator for the Conservation Collier Program, spent their morning re-mulching Otter Mound Preserve’s pathways. Located in the Estates area of Marco, Otter Mound Preserve has been recognized for its historical, cultural and environmental attributes. In 2004, the county purchased the 2.45 acres from its owners and on March 7, 2007 the preserve opened to the public.

According to the county’s understanding of the area, Otter Mound sits atop shell mounds created by the Calusa Indians, thus creating a tropical hardwood hammock over time. These hammocks are often found in higher elevations that don’t tend to flood very often. They are also classified by their canopy of tall trees that shade the area below. Over time, like many of the natural areas of Florida, much of the tropical hardwood hammocks have disappeared due to human encroachment.

Archaeologists have found a large array of Calusa Indian remnants on and around the Otter Mound Preserve. It is thought to have possibly been a village at one point.

Whether a Native American village or not, their presence in the area was heavy 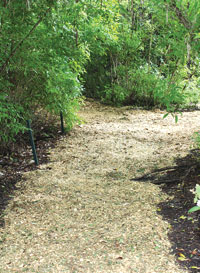 as seen through the amount of pottery, tool, shell and bone remnants uncovered throughout the years.

Fast forward to the early 1900’s, and there’s no doubt that the Estates was not only a village, but a thriving one at that. Caxambas Village featured a hotel, school and fishing camp.

There was even once a house on Otter Mound. Although it wasn’t called Otter Mound until 2007. Named for Ernest and Gladys Otter, who bought the property in 1950, Ernest Otter added another historic feature to the area. Throughout the mound are walls of large conch shells, perfectly aligned. Some are in tiers and some are barely visible through the brush. “There is actually over 1,700 feet of shell wall built by Mr. Otter. He built that to put terracing in; I think he wanted to farm because these soils are known for being really great. In fact, there was a 100 acre pineapple farm up the way from here back in the early 1900’s,” states Sulecki, who oversees all Collier preserves as well as personally taking care of three, including Otter Mound.

“As a tropical hardwood hammock, that’s why (the county) purchased 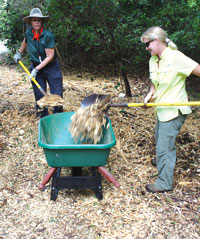 Alexandra Sulecki and Nancy Richie worked through the heat to spread more than half the mulch in just one day.

it, but also because of it’s historical and archaeological aspects. Everything here is protected,” she adds.

As a part of the Conservation Collier Program, the county’s job is to care for the mound and keep it in as natural a state as possible. Unfortunately, many non-native species have been planted or simply taken over different areas. Due to the sensitive nature concerning Calusa artifacts, an archaeologist must be onsite when any planting or plant removal takes place.

Just recently, Sulecki had a number of non-natives removed. “When we first opened the preserve in 2007, we mulched the trails with commercial mulch which was very expensive – thousands of dollars. Not thousands because of the mulch, but for everyone to lay it,” explains Sulecki.

“We have enough non-native species here, so I decided that, over time, we could start to reduce their presence in the preserve and use that as mulch. So the mulch you’re seeing here is actually the remnants of two Royal Poinciana trees that we removed. Now, I love Royal Poincianas, just not in a hardwood hammock preserve. They are non-natives, and they are also invasive.”

Removing the trees gives the 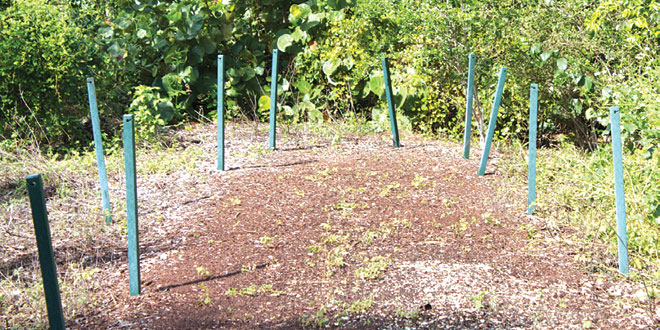 tropical hardwood hammock a chance to regrow to its natural state, but there is much work to do. Many more trees and shrubs would need to be removed and possibly be replaced by native plants, but it must be overseen by an archaeologist.

For now, Sulecki is happy to have been able to remove and reuse the trees within Otter Mound. A hefty job for both her and Nancy Richie, the ladies were able to finish half of the job in one day after a call for volunteers was sadly unanswered. But no fear, Sulecki plans to spend one more day on the mound to complete the job. New ropes will line the guard rails as well.

The fresh mulch and ropes bring a fresh perspective to the historic Otter Mound. A place to reflect, reminisce and remember those who came to Marco before us, Otter Mound is a part of who we are. Walk it’s paths, feel the shade of the canopy and admire the intricate building of Mr. Otter’s shell mound.

Otter Mound is located on Addison Court, just off of Inlet Drive from North Barfield. It is the highest point on Marco Island.