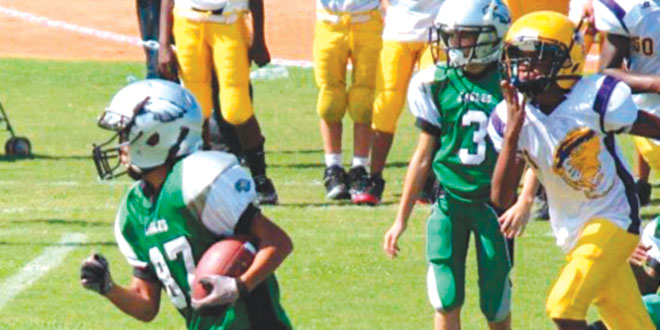 On Saturday, August 31st the Marco Island Eagles U-10 and U-12 teams had their first home games of the season with both team playing the Golden Gate Tigers. The U-10 team opened the day with a great start being able to control the Tigers on defense and scoring touchdowns when they had the ball on offense. Touchdowns by several of the Eagles players put points on the score board early in the game and once the youngest Eagle team started to fly, they never looked back. Players that were key to the high flying victory this week was every member of the U-10 team. The Eagles beat the Tigers with a final score of 24-0.

The U-12 Eagles, looking for the first win of the 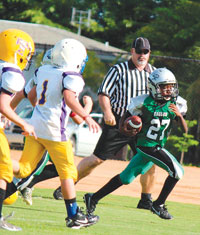 U-10 Player # 27 Christian Poteau runs the ball for the Eagles. PHOTOS BY PATTY WEBB

season, were looking to protect “the nest” while playing their first home game. The Tigers were the first to score as the Eagles team was unable to contain the outside run after a short screen pass. As the game continued, the Eagles were able to move the ball and after a 50 yard run, Castor Vosburgh got the Eagles on the scoreboard.

While the Eagles could not stop the Tigers onslaught of outside runs, they were able to continue to put points on the score board. Even after touchdowns by RB Jordan Love and QB Richard Reisinger, “the nest” had been lost to the Tigers. The final score was Golden Gate 37 – Marco Island 19.

Check the schedule for the next game in the Calendar of Events.