On Tour with Marco Island Utilities 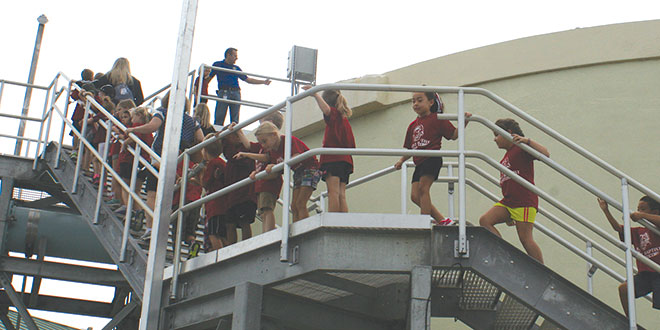 Taking a look into the massive storage tank, students also got a bird’s eye view of Marco Island. PHOTOS BY PAT NEWMAN

When 24 first graders arrived at the Marco Island Utilities site for a tour of water distribution and wastewater treatment, many of the girls and boys wanted to be policemen or fire fighters when they grew up, but after an eye-opening walk-through and presentation by several of the city’s key engineers and operators, at least six students switched to water operations as their future career field.

The students from First Baptist Church of Naples Academy visited the utilities operation on East Elkcam Circle as part of their unit study on community services. Upon arrival, they were greeted by Jeffrey Poteet, general manager of Marco Island’s Water and Sewer Department, along with John Pratt, chief RWPF operator and Justin Martin, manager of engineering, technology and operations.

“What do you think we

Justin Martin, Manager of Engineering, Technology and Operations, point out some of the various water lines and tanks to the touring first graders, indicating the massive size of some of the tanks storing water.

do here at water and wastewater treatment plant?” Poteet asked his attentive audience. “You bring clean water to people,” answered one student. “And you clean dirty water,” added another.

Poteet elaborated on the procedure explaining that Marco Utilities is unique in that it treats both surface water and ground water. Much of the island’s potable water comes from lakes located nine miles off island, he explained. The ground water plant treats brackish water, a combination of salt and freshwater, forcing it through filters called “membranes” that remove the salt.

Learning to treat water and wastewater requires “good science and math skills,” Pratt told the group. One method of determining what kind of bacteria is in the water is to use “stalked psyllium,” or microscopic bugs. Wastewater Treatment Operator Kevin Meyers illustrated how 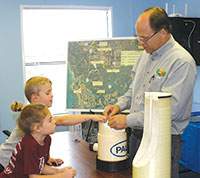 the “hairs” of these tiny organisms suck in the waste in a live power-point presentation.

Marco Island’s water is stored in tanks — and also 700 feet underground. The utilities plant team pointed out the numerous plaques on the wall of the plant’s laboratory recognizing the quality and efficiency of the operation. Water standards must be followed along with reports documenting water quality to numerous government agencies, assuring that the product distributed is safe.

During the question and answer phase of the tour, the children were asked by Poteet if they thought there was more, less or the same amount of water on the earth as existed 1 million years ago. Hands went up for more or less predominantly; with only a couple hands shooting up for “the same amount.” The correct 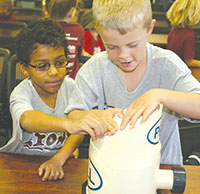 Cooper Pesco and Gray Ingram take a closer look and feel the stiff bristles used in a “membrane”filter.

answer is the same amount, a fact deemed “pretty cool,” by Poteet who explained the phenomenon as a result of the earth’s hydrologic schedule.

“Do you have emergencies?” asked one of the class chaperones. “We have emergencies every single day,” Poteet replied. “We have line breaks and big breaks,” he said. “Water and wastewater operators are first responders. With our staff and field crews, we get the problems solved. With no water, you can’t fight a fire, and in the event of a hurricane, we have to get water issues fixed before evacuees return to their homes,” he explained.

Marco Island Utilities has about 70 employees. Some work at the treatment plant, while others help facilitate meetings and the technical aspects. All are considered essential personnel. “We are here to help our community in time of need,” Poteet concluded.