On the Shady Side 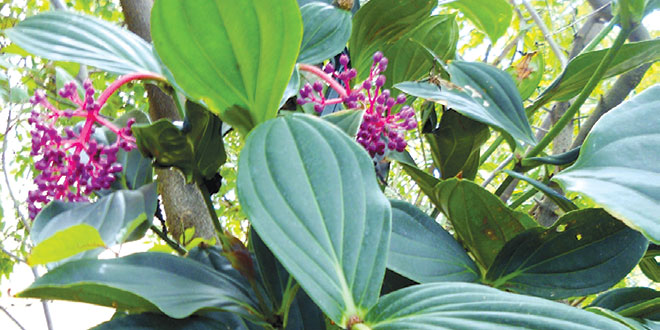 When most of the flowering plants and shrubs are struggling to thrive in the hot summer sun and waiting for the “cooling” afternoon showers, there is a group of plants that might be a little bit smarter. They thrive in the shade. Not only are these shade plants doing just fine, they are blooming.

In Florida, shade takes on a different meaning than the shade “up north.” I don’t think we have the same deep shade areas in Florida as they do up north because the sun is so intense here. It’s lower in the sky, and there are more wide-open spaces with less to distract from or interfere with the sun’s rays and intensity.

When I first moved here more than 20 years ago, I remember driving around looking for a spot where

I could wax my car in the shade on public property. Never found one. Try finding a spot where you can park your car without turning you dashboard into a Weber grill.

Shade in Florida is dappled sun that filters through our so-called shade trees. Even the north side of my house is pretty bright a good portion of the day.

When most people think of planting in these shady areas, the first things that come to mind are ferns and philodendrons. While both of these are good examples of green plants that will do well, let’s go one step further by thinking of something that not only give different shades of green but also produces flowers.

so spectacular. Alocasias are one such group in which the foliage comes in many different sizes, shapes and colors. These plants with their colorful tropical leaves can hold their ground with any shade loving flowering plant.

One of the most popular plants for shade is Firebush (Hamelia patens). It blooms year round and is wildlife friendly, attracting hummingbirds and all kinds of birds and butterflies for its berries and nectar. Firebush also does well in medium to bright light.

A couple of years ago I found two new plants that bloom almost continually in the shade on and off all year. The first one is Spicigera. Part of the shrimp plant family (justicia) commonly called orange plume, it is a 5-6-foot shrub which will bloom on and off all year long with orange plume-like flowers. Another is White Candle

plant (Whitfieldia elongate). I first saw this plant growing and blooming underneath a stairway. The flowers are white and look like candle tops, while the foliage is a beautiful shiny dark green. This plant not only blooms year round as a container plant on my lanai but has been in bloom for more than three years.

Another is giant White Begonia (Odorata). This plant not only grows and blooms in the shade but does double duty. It also adapts to sunnier locations. It has white flowers and large shiny green foliage. As a matter of fact, almost all begonias will do well in shade.

feet with each stalk having multiple blooms. Not very common, but if you can purchase one, it is an unusual plant that will bring a lot of inquiries and be a real find for your shade garden.

A larger plant for shade is Brazilian Snow (Ctenathe lubbersiana). It will reach 2-4 feet. Leaves are white-to-yellow and green. This one does real well as a container plant and is very showy. Flowers are inconspicuous.

Last but not least are Bromeliads, which are some of the most colorful plants and so easy to care for. Some of their blooms can last for months, and another bonus is they put out pups (new plants) every year. So buy one, get many. It’s the plant that keeps giving. Share them with friends.

These are just some of the shade plants that are out there. Have fun searching for others. KEEP BUTTERFLYING!!!