On the Road from Santa Fe 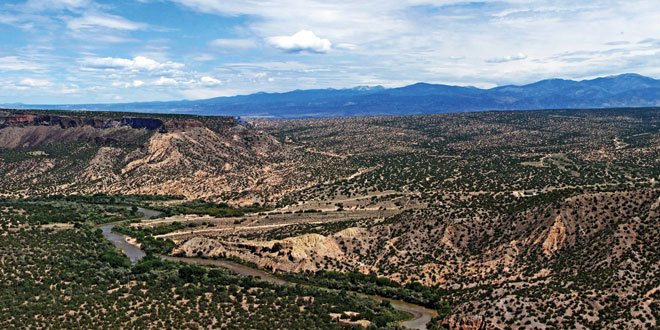 With Santa Fe as a base, there are some interesting, easy day trips that feature

The most popular day or overnight trip from Santa Fe is to Taos following either the high or low road. The high road with its dramatic scenery, traditional villages, artisans, and galleries is about a two and a half hour drive north, but enticing stops along the way can easily add more time to the trip. The low road takes just under an hour and a half. Along the high road, Chimayo, a village known for its weaving is also the location of El Santuario de Chimayo which is known as the “Lourdes of the Southwest.” It attracts thousands of pilgrims each year who seek the healing powers ascribed to the dirt in the anteroom of the church or simply spiritual renewal. Nearby Truchas, at 8,000 feet in the shadow of 13,000 foot Truchas Peak was used by Robert Redford for the filming of “The Milagro Beanfield;” today it is home to a thriving artist community.

In a prior column, I wrote about the Taos Pueblo, the premier site in this area.  The town of Taos, surrounded by the Sangre de Christos Mountains, 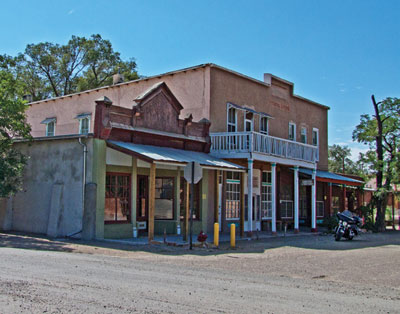 The ghost town of Cerrillos was the perfect setting for Young Guns and Lonesome Dove.

with the pueblo architecture of its downtown plaza, rich history, art culture and museums deserves additional time for a visit. Kit Carson lived here and his restored home is now a museum, as is the former home of Ernest Blumenschein, the founder of the the Taos Society of Artists. The Millicent Rogers Museum features Native American, Hispanic and Anglo art of the Southwest. Three additional museums, shops, restaurants and trolley tours make Taos a worthwhile destination.

Another half hour north is Taos Ski Valley, but with its alpine terrain it seems a world away. The cooler air and lush greenery make it a nice diversion from the dusty browns and magentas of land below it. There are some restaurants here, including one with Bavarian cuisine. During spring, summer and fall, activities are limited to lift rides, hiking, and horseback riding. In a conversation with the manager of the ski area, he told us that he is looking to add activities such as a zip line and other summer amenities that are becoming typical at ski resorts.

Thirty-five miles northwest of Santa Fe is Los Alamos. Started as a town for the nuclear research facility, Los Alamos National Laboratory where J. Robert Oppenheimer and others developed the atomic bomb, it now offers the Bradbury Science Museum as well as the Los Alamos Historical Museum and Fuller Lodge Art Center. The Bradbury, operated by the National Laboratory, features 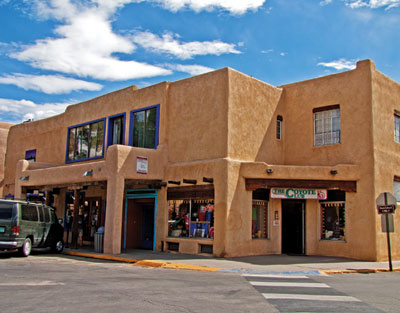 interactive displays on the history of the Manhattan Project as well as the research conducted by the Lab today in the areas of life science, energy, the environment and supercomputing.

The Los Alamos area is the portal to Bandelier National Monument mentioned in an earlier “Speaking of Travel” column and the Valles Caldera National Preserve.  One of only three super volcanoes in the United States, this preserve offers hiking, fishing, hunting, bike and horse back riding, van tours, as well as snowshoeing and cross country skiing in the winter. During the summer, the preserve is home to an elk herd of approximately 3,000.

If you do visit the Los Alamos/Bandelier area, take a moment to drive to the White Rock Overlook for an unparalleled panoramic view of the Rio Grand Canyon and surrounding mountains. It is located off Route 4, just beyond the White Rock Visitor Center. Turn off Route 4 for the parking lot for the Bandelier shuttle; continue past the lot, take the first left and follow the signs.

Another picturesque option northwest of Santa Fe is an excursion into what is known as Georgia O’Keefe country. On this trip, see the many rugged, colorful  barrancas (gorges), mesas and mountains that inspired her. Head toward Abiquiu (AH – bee- cue) where she lived during the winter and spring. Guided tours of her home and ranch here are available by reservation only. She spent summer and 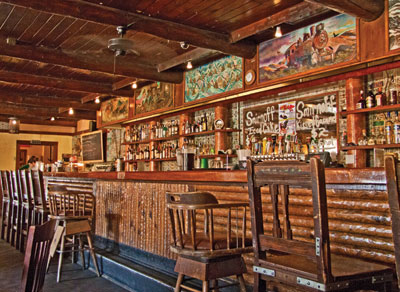 This bar in the former miner’s commissary in Madrid boasts that it is the longest bar in New Mexico.

fall at her second home known as Ghost Ranch, ten miles away. The 21,000 acre ranch is now a Presbyterian education and retreat center. Her house is not open to the pubic, but visitors can hike along the trails or take an O’Keefe themed walking, horse back or bus tour. There are museums of paleontology and anthropology here. Overnight accommodations are available, as are massages and body wraps The center runs numerous courses ranging from archeology to the arts, wellness and spirituality.

South of Santa Fe, a popular excursion is the Turquoise Trail off Route 14, to Albuquerque. So named because turquoise was mined here for thousands of years by the Native Americans, Spaniards, Mexicans and Americans. It is scenic, with its rolling hills and mountain background. Historically, outlaws roamed the hills, as did Confederate soldiers. It was part of the trail of the “Long Walk of the Navajo” in 1864 when they were forced at gunpoint from their homes in Arizona and New Mexico to confinement at Fort Sumner. 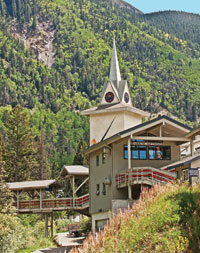 A visit to the Taos Ski Valley’s alpine terrain providescool, green diversion from the brown andmagenta landscape below it.

Madrid (MAD rid), once a bustling coal mining company town at first, met the same fate as Cerrillos. In the 1960’s and 70’s though, it was “discovered” by hippies and artists… later by bikers. Parts of “Easy Rider” and “Wild Hogs” were filmed here. Now it’s one street flourishes (to a degree) with galleries, shops, a mining museum and restaurants, including one that was the miner’s commissary and home to what is said to be the longest bar in New Mexico. Madrid is known for its Christmas light display which was so bright in the 1920’s (when the town’s electricity from the coal company was unlimited) that TWA used to divert night flights over Madrid so passengers could see the spectacle. The Christmas light display has been revived, but, of course, not to the extent of the days of unlimited electricity.

Approaching Albuquerque along the Turquoise Trail, a side trip can be made up to 10,000 foot Sandia Crest for an aerial tram ride to the top and a panoramic view of the city and the Rio Grande valley.

For our many day excursions from Santa Fe, we decided to upgrade our full size rental car to a Ford Escape SUV. Traversing the many mountain roads, we were glad we did.

I have always found booking rentals through Costco to be the most economical and even when we decided to upgrade at the airport, we were able to use Costco’s special rates.