On the Docket: Marriott Ordinance 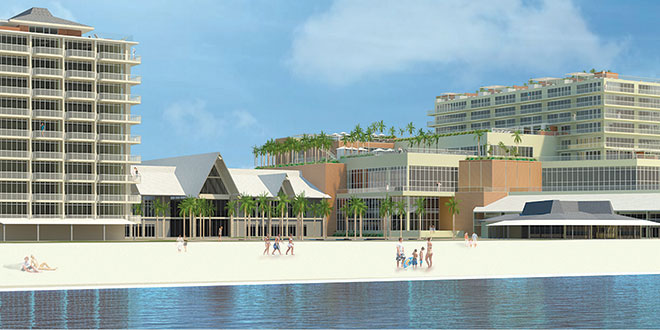 On Monday, June 2, at 5 PM, the Community Room at Marco Island City Complex is sure to be packed with folks anxious to hear the fallout from the first reading and public hearing of the ordinance amending the Marco Island Marriott Beach Resort’s Planned Unit Development, or PUD. Be sure to check CBN’s web site and Facebook page for coverage of the meeting.

Many have been waiting for this since last August when Marriott General Manager Rick Medwedeff appeared before Marco Island’s Planning Board with an informational presentation about the resort’s $150 million proposal to renovate and upgrade its existing meeting space, add break-out meeting rooms, build a third guest tower and elevate the resort to luxury-tier status under the JW Marriott Resort moniker.

To be sure, the proposed project has many passionate advocates and detractors, and after 10 months, a couple of revisions, 17 Planning Board conditions, a month-long delay and a lot of mud-slinging, Marriott officials and Marco Island residents are ready for the project to come under the City Council’s careful microscope. In fact, the Marriott launched a new web site — www.good4marco.com — on May 20 in anticipation of the public hearing.

City Councilors are ready too, and have spent the last month preparing themselves for the public hearing.

The Marriott is part of a PUD, which is a regulatory process that promotes large-scale, unified land development. According to Marco Island City Manager Roger Hernstadt, the process to create a new PUD is outlined in Section 30-63 of the city’s Land Development Code (Planned Unit Development PUD Procedures). Once the applicant has created a PUD — like in the Marriott’s case — the process to amend a PUD is outlined in Sec. 30-62 of the Land Development Code (Amendment Procedures).

“The purpose and intent of establishing the planned unit development district is to provide flexibility via structured procedures and standards to allow multi-element planned developments at appropriate locations, all in accordance with the planning and development objectives of the city under this code and the comprehensive plan,” explained Hernstadt in an external interview.

While much has been made of the Marriott project’s addition of 26,000 square feet of meeting space, 84 new guest rooms and 1243 parking spaces, City Council’s decision really boils down to four elements: two PUD amendment requests and two land development code modifications.

First, Marriott is asking for an 11-foot variance on the current height limit in its PUD, which would allow for the proposed new guest tower to reach 111 feet — the exact same height as its current two guest towers. Second, Marriott wants to build a structure on the east side of Collier Boulevard to house its HVAC systems. It would be located north of existing cooling tower.

The land development code modifications sought by the Marriott include adjusting a 10-foot landscape buffer to a 5-foot buffer on the parking lot north of the valet entrance and reducing the number of landscaped islands on the interior of the parking lot.

These modifications come with concessions on the Marriott’s part as well. There will be no artificial lighting on the tennis courts. Landscaping on the entire perimeter of the parking lot will be more dense than it is now, including the landscaping on the south end near Spruce Avenue. Finally, the reduction in landscaped islands in the parking lot will be offset with a comparable square footage amount and type planted anywhere on city property per Hernstadt’s direction.

In municipalities, the creation of ordinances are quasi-judicial matters that require two public hearings. Questions of land development code and PUD amendments begin with the Planning Board, whose job it is to hear development proposals and advise City Council on the proper course of action. In most cases, the board also helps develop or vets the the ordinance language. It is City Council’s prerogative to accept or change conditions set forth by the Planning Board and the ordinance language.

According to Hernstadt, it is during City Council’s first public hearing where the meat of the ordinance is carved out, especially with complex projects such as the Marriott.

“Until the elected officials hold the first of two public hearings, including obtaining the public testimony, then the elected body typically proceeds to establish a set of conditions by accepting, modifying or deleting those generated by the planning advisory entity and or creating the elected body’s own ‘new conditions’ by a majority vote of the elected body,” he explained.

Sometimes, a continuance of the second public is in order to finalize ordinance language, and then at the final public hearing, City Council may further negotiate the non-mutually agreed to language. Said Hernstadt: “I have seen governments bend over backwards to work out conditions/language with petitioners, but I have also seen the same governments take the ‘our way or the highway’ approach — it just depends on the project.”

Originally, City Council was to hold the first public hearing on the Marriott project during its May 5 regular meeting, but councilors voted to table the hearing until June 2. The reason: They did not like that the bulk of the language in the ordinance was written by members of the Marriott team, and some councilors felt the process had been circumvented because the Planning Board never saw the ordinance language. Councilor Amadeo Petricca led the charge.

“I was under the impression that ordinances were written by the city and presented to the planning board and then to City Council,” Petricca said during the May 5 meeting. “It is inconceivable to me that the petitioner would draft the official city document…I read through the ordinance, and there are things in there that I find offensive. I don’t believe this is the way government works. I believe we are putting the cart before the horse.”

Councilor Joe Batte echoed these concerns: “This is one of the few times that the City Council is getting an ordinance that hasn’t been vetted by the Planning Board. They didn’t vet this, and they are my planning advisory board. They give me advice, and they did not vet it.”

“Well, this train cannot leave the station until I see every single bit of evidence backward and forward that my Planning Board has vetted. That’s the way it is supposed to be. That is our process…I want to take as much time with this as we have to Mr. Chairman (Ken Honecker), and make the very best decision we can for our people,” Batte concluded.

Hernstadt and City Attorney Burt Saunders attempted to assuage these concerns. “In land-use matters, it is not uncommon at all for the petitioner to draft the documents that are considered by the staff and City Council…I can assure you that staff has gone through every line of that ordinance. There is nothing in that ordinance that has not been reviewed, and in fact, that review continues…The mere fact that the petitioner drafted the ordinance does not mean that the petitioner is getting whatever it wants,” Saunders told City Council.

Although the public hearing was tabled until June 2, the subject came up again during the May 19 meeting. “Especially with the Marriott, the thing that is so important is the perception the people will have,” Batte emphasized. “The perception that we don’t have total control of this ordinance is something that will hurt us. It will hurt our decision. (The residents) need to know that the city is in control of these things, not the petitioner. Being this is such an emotional issue, we are all going to make a good decision about this, but it is critical that we get the right perception out there.”

Again, Saunders assured City Council: “ Without question, we will be in control of the ordinance. There will not be anything snuck in by anybody, and we will make sure the city’s interest is protected. If the perception is that the Marriott is in charge of this, it is a misconception.”

And, now City Council again prepares to hold the first public hearing for the Marriott plan. While the ordinance has not been vetted by the Planning Board, it has been written, tweaked and rewritten by Saunders with the input from the city’s planning staff and Hernstadt. June 2 promises to be a long night, but if statements made during the May 5 City Council meeting are any indication, councilors are ready.

“I think it is a question of rolling up our sleeves,” Councilor Larry Honig told his fellow councilors.

Councilor Larry Sacher agreed: “The Planning Board has done an outstanding job and worked extremely hard, but at the end of the day, it is still incumbent upon us to ask the questions.”