On the Chocolate Trail With Rabbi Deborah Prinz 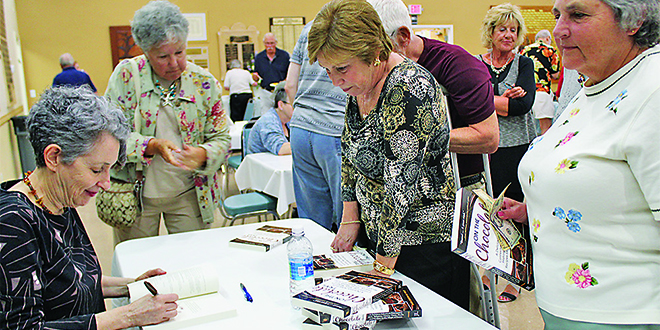 Chocoholics united at the Jewish Congregation of Marco Island on March 4th for a presentation by author, Rabbi Deborah Prinz titled, “On The Chocolate Trail.” The presentation was part of the congregation’s Saul I. Stern Cultural Series, now in it’s 23rd year.

“It’s an interesting subject. We look for interesting subjects for the [Saul I Stern Cultural] series,” said president of the congregation, Sue Baum. “We try to have a potpourri—some history, some comedies, and in two weeks we have part of the philharmonic coming.”

Rabbi Deborah Prinz knows chocolate. She is, without a doubt, a chocolate person. She even has what she calls “choco-dar” or “radar for chocolate experiences.” Her book “On The Chocolate Trail,” explores chocolate’s rich history and its relationship to Judaism, as well as other world religions. Prinz and her husband Rabbi Mark Hurvitz have traveled extensively, tracing chocolate’s path from the old world to the new and exploring 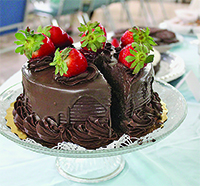 A buffet of chocolate treats awaited guests, following the presentation.

its connection to Jewish history.

Prinz opened the presentation by explaining what “on the chocolate trail” means to her. Over the course of her research and the books publication, the phrase has evolved, much like her knowledge of chocolate and it’s cultural connections to Judaism.

“Since the book came out, on the chocolate trail means to me the traveling I am doing, as I’m able to share with audiences around the world and around the country the stories that I learned about Jews and chocolate,” 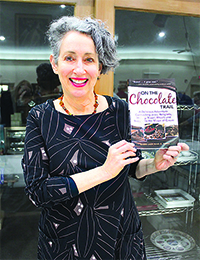 Photos by Samantha Husted | Rabbi Deborah Prinz with her book “On The Chocolate Trail.”

Throughout her journey, Prinz discovered many surprising theories about chocolate. While at a chocolate shop in Bayonne, France she discovered that the French attribute Jewish people for bringing chocolate making to France. Despite all her years of Jewish studies Prinz says that had “never heard of this idea,” and was intrigued. The book explores other theories about chocolate and it’s globalization and how it relates to different cultures and peoples.

After the presentation guests were welcomed to a buffet of chocolate items. Some were homemade by congregational members using recipes from “On The Chocolate Trail,” while others were ordered specially from gourmet
pastry shops.

For more information about the Saul I. Stern Cultural Series visit: www.marcojcmi.com or call 239-642-0800.