On Political Correctness and Beheadings 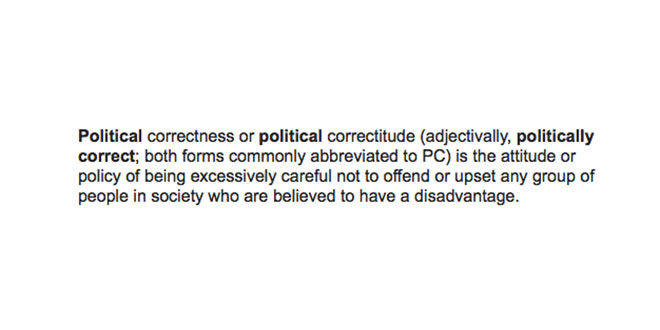 The readers may recall an older opinion piece on these pages regarding “political correctness” a.k.a. “PC.” The readers may also recall various warnings expressed in this column and elsewhere as to how PC is killing us, and judging by the events of last week, it looks like things will get worse before it gets better.

From the insane notion of trying to forcefully change a privately-owned professional football team’s name (established in 1932) to not allowing elementary students to say “bless you” when a fellow student sneezes, the madness continues. “Workplace violence” is becoming a popular term for the apologists when trying to explain away killings and beheadings performed in the name of Islam. How can one explain the president of the United States indicating in a nationally televised speech that “ISL is neither Islamic nor is it a State” when the “I” in ISL stands for Islamic and “S” for state? In case you were wondering what the “L” stands for, it stands for “Levant.” It is a geographic and cultural region consisting of the “eastern” Mediterranean littoral between Anatolia and Egypt. The Levant today consists of Cyprus, Israel, Jordan, Lebanon, Palestine, Syria and part of southern Turkey.

When Major Nidal Malik Hasan attacked United States military personnel in Fort Hood and killed 13 and seriously injured another 30 while shouting Islamic verses, our government chose to declare the incident as “workplace violence.” A kind and gentle phrase created by the so-called “wise men and women” in our government whose only job in the world seems to be creating euphemisms for every dastardly act committed by terrorists.

Hasan worked as an intern and resident at Walter Reed Army Medical Center for six years. Colleagues and superiors were deeply concerned about his strange behavior and comments. On weekends, he wore traditional Muslim clothing called “dishdasha” and went shopping in his neighborhood. No one thought this was unusual for a major in the US Army, and no one reported it to the authorities. Hasan was not married at the time and was described as socially isolated; stressed by his work with soldiers; and upset about their accounts of warfare.

Two days before the shooting, which occurred less than a month before he was due to deploy to Afghanistan, Hasan gave away many of his belongings to a neighbor — an almost sure sign of a person getting ready to commit suicide or at least on the verge of committing a heinous act! Afraid to be labeled an “Islamophobic suffering from an acute case of islamophobia” (another neat and peculiar word invented by the same PC crowd in Washington, D.C., and universities and colleges all around the country), everyone kept quiet. Had someone been brave enough to report the strange and bizarre behavior of Major Hasan to the authorities, 13 U.S. military personnel would be alive, and 30 more would not be suffering in their daily lives today.

Just yesterday, the police arrested Alton Nolen, 30, who during Thursday’s attack in Moore, Oklahoma, beheaded Colleen Hufford, 54, with the same kind of knife used in the plant he worked for. He also stabbed Traci Johnson, 43, a number of times before company CEO Mark Vaughan, a reserve sheriff’s deputy, shot him. Thankfully, he was carrying a weapon with him. The carnage would not have stopped if he had not shot Nolen. The threat was over by the time the law enforcement personnel arrived on the scene.

Police said the FBI was asked for assistance in the case because of the “manner of death” of the victim and reports from co-workers that Nolen had recently started trying to convert several employees to Islam. Nolen had been posting Islamic verses as well as Jihadist literature on his “Facebook” page, and no one, not a single solitary person who read the articles, reported it to the authorities. Once again, the deceased and the wounded are victims of the political correctness being imposed upon our nation on a daily basis.

Many politically correct scholars and others tried to distance Islam from the beheadings. However, leaders of various Jihadist groups justify the decapitation (beheading) of prisoners with Qur’anic scriptures. Chapter (Surah) 47 contains the verse, “When you encounter the unbelievers on the battlefield, strike off their heads until you have crushed them completely…” Although Arabic terms are generally straightforward, some are less clear. In this case, many scholars have translated the verse as, “When you meet unbelievers, smite their necks.”

The danger is real. Let us forget political correctness and see the world as it really is. Know who the enemy is and what the enemy wants. Stay clear of politically correct explanations of straight forward events.

And finally, we must all continue to be vigilant. The enemy is already here; they are amongst us; and they continue to arrive through our porous “borders.”

What do they want? Why do they hate us so much? A lot of readers write and ask me about this. The readers are confused and rightfully so. Other than certain websites and a handful of national figures even try to explain this to the general population. The goal of the enemy was simply stated by Osama Bin Laden way back in early 1990s: Establishment of a worldwide Caliphate to convert everyone to Islam either by persuasion or by force!

To those of us who care and who are truly concerned, the writing is on the wall. We are starting to see what the goal of these terrorist groups is now that the ISIS/ISL have declared a formal Islamic state. “There is no difference between Hamas and Hezbollah, the Muslim Brotherhood, Al Qaeda and the Boko Haram; they are all dedicated to the creation of a global Islamic Caliphate.”

Simply put, a “Worldwide Caliphate” is the concept of a single theocratic one-world government as proposed by some Islamic extremists in their efforts to overthrow the world’s current political systems. The last known Caliphate was Sultan Abdulmejit II of the Ottoman Empire. The Caliphate was abolished on March 3, 1924, by Mustafa Kemal Ataturk, first President of modern Turkey, and Sultan Abdulmejit II was exiled.