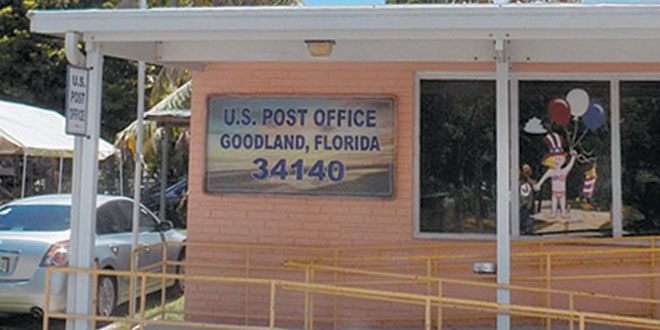 Judith Pritchard was Goodland’s last postmaster. She was popular here and served faithfully for eight years until her retirement on July 31, 2012. Due to budget deficits, the U.S. Postal Service (USPS) has since cut back on personnel and closed some offices. Goodland was spared, but instead of a postmaster, a series of postal clerks ran our post office. They were Shannon Mitchell, Marie Thompson, Rhonda Joyce, and our current clerk, Asiel Rodriguez. A sprinkling of substitutes, filled in at times. At some point, the American Flag was taken down, likely for a coming storm. Due to the revolving clerical door, it was not raised again until last week. At least no one can recall seeing it before then. (A photo in the post office depicts a lowering on 9/18/13.) Finally, someone did notice. On May 31, 2016, the day after Memorial Day, a Goodland Resident, a veteran himself, wanted to know why our post office had no flag up the day before. Things moved fast after that. Considering the USPS was involved, they moved at warp speed. We have Asiel Rodriguez to thank for this. Rodriguez, who became the postal clerk in charge in March 2016, was contacted on June 1. The flag was raised the same day. One of the first things he noticed when he came 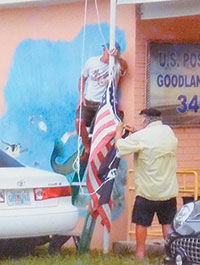 Submitted PhotoGoodland postal employee, John Diamantis, with an unidentified helper, lowers the American flag at Goodland Post Office on 9/18/13. To date, no one is sure that it has flown since. On 6/1/16 it was raised again.

to Goodland was the bare flagpole outside the post office. “I thought it a shame that we had no flag,” said Rodriguez, “I found a flag in the back, but had no way of putting up.” As we were puzzling how to go about it, Lou and Linda VanMeter showed up. Lou is the preeminent engineer type guy who can figure out how to repair almost anything. Within minutes, he and Asiel had the pole down, the halyard reattached, and the flag up and flying.

Marco Island Postmaster Michael Gomez came down the next day to look things over. “He wanted to see if the nearby streetlight would illuminate the flag at night,” said Rodriguez, “He decided it wouldn’t and asked that the flag be taken down at the end of each day until a floodlight could be installed.” Gomez also ruled that it would be inappropriate to fly a Goodland Flag as USPS had ordered a MIA/POW flag to be flown on their buildings to honor our dead and missing. So, until a floodlight is installed, the flag will be raised in the morning and lowered each afternoon at 4:30 PM when the post office closes. That means it will not fly on weekends and on national holidays, at least until a floodlight is installed. Let’s keep our eye on it until then.