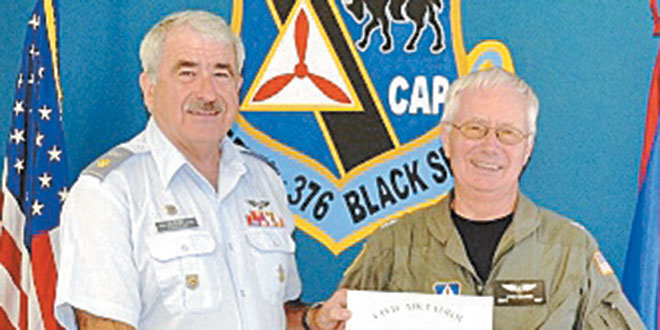 At a recent bi-weekly meeting, Captain Lyle Odland was recognized by the Marco Island Senior Squadron for his long and distinguished community service.

Captain Odland was a volunteer member of the National Marrow Donor Program (NMDP). He was trained as an unpaid volunteer currier of life-saving bone marrow, peripheral red blood cells or adult stem cells for the advanced treatment of human cancers. Following his training, he became a currier and made his first volunteer pickup and delivery on April 17, 2008.

The NMDP’s expectation was that each currier would make a minimum of two deliveries per year. However, during the next 5½ years, Lyle made it a personal goal to attempt one delivery per month. His last assignment was on December 24, 2013, when he completed his sixty-third delivery. On that December his service ended due to the mandated maximum age restriction for all curriers. 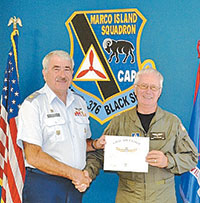 the United States: Arizona, California, Colorado, Florida, Georgia, Massachusetts, Michigan, Minnesota Nebraska, New Jersey, New York, North Carolina, Ohio, South Carolina, Tennessee, Texas and Washington. Thirteen of his total deliveries involved the following foreign countries: England, Finland, Germany, Italy, Scotland and Spain. In each instance, Captain Odland was extremely well received by the medical staff. At no time did he have contact or even knowledge of the identity of either the donor or the recipient.

Fulfilling this volunteer position involved him being available for the assigned time, and being comfortable and effective in dealing with air travel, TSA inspectors, custom officials, and legal authorities in each location. In addition, he had to be able to problem solve when unexpected travel arrangements were interrupted and/or changed while still being able to meet the critical project timeframe.