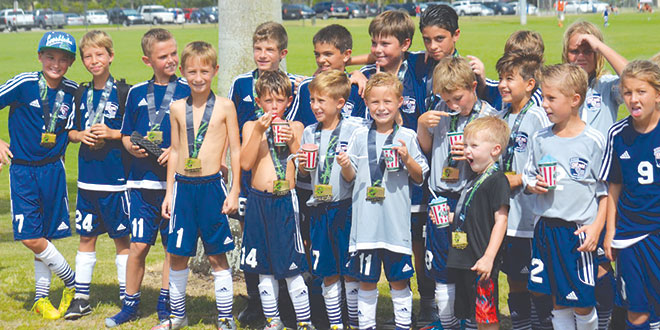 For the first time in Marco Island Optimist Soccer history, the soccer program crowned two 1st place champions (U10 and U12 Girls) and a second place runner up (U9 boys) in the Lee County Recreational League County Cup Tournament. The Optimist Club teams, named the Marco Island Sharks, advanced all five of their recreational travel teams to the LCYS County Cup Tournament set over back-to-back weekends at the Bayshore Soccer Complex in North Ft. Myers. The Optimist Club’s U10 and U12 girls’ teams won their championship games, and the U9 Boys, playing up a year in the U10 age group, finished in second place. The U12 boys team, finished successfully as well, however, missed advancing by one point to the semifinal play for their division.

What began as a quest to build a year round soccer program, just four months ago, resulted in successful development of over 50 players across five travel teams. Under the organization’s FYSA soccer affiliation, the Optimist Club assembled U9 and U12 boys teams as well as U10, U12 and U16 Girls teams to play in the Lee County Youth Soccer (LCYS) Recreational Travel League. The OCMI teams played in the LCYS Fall League 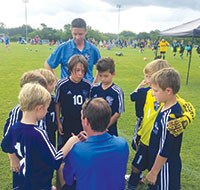 against teams throughout Collier and Lee Counties including the San Carlos Scorpions, N. Ft. Myers Knights, Lee County Strikers and Ft. Myers Beach Soccer clubs. In addition to playing in the LCYS League and County Cup Tournament, the travel teams also played in several tournaments in the Naples and Ft. Myers area to continue to test their skills and develop.

The U10 Girls, coached by Jack Winnik and Dan Noyes, lost just one game during the league season and were flawless in the County Cup tournament. The Lightning Sharks, as they named their team, had lost earlier in the year to the San Carlos Scorpions. It was the team’s only loss in the regular season. However, this earlier defeat didn’t discourage any of the players. They won the final game, 2-1, with both goals scored by Sydney Koszo. “The girls really excelled because of their teamwork and commitment to each other. It shows the progress they’ve made as teammates and individually. I’ve never seen a group of girls so happy to celebrate their success and support each other when they were down. It’s a very special group of girls, ” stated Winnik.

[/caption] class=”alignright size-full wp-image-53395″ src=”http://www.coastalbreezenews.com/wp-content/uploads/2016/01/A22-CBN-1-8-16-2.jpg” alt=”A22-CBN-1-8-16-2″ width=”200″ height=”191″ />The U12 Girls coached by Jen Reeves and JW Drott played 8v8 for the first time in their young careers and it took some time to get used to a bigger field and working together up and down the field. The key to the girl’s success was the strong bond they formed throughout the season attending training two days a week and playing most Saturdays. The team was fortunate to have a full squad of 5th through 7th grade females. The girls played an undefeated San Carlos Scorpions team in the Championship, a team that they had lost twice to earlier in the season. The girls didn’t let the prior defeats set them back going up 2-0 early in the game. “This team wanted to win. They had the confidence and the determination to overcome many little obstacles they faced this season and win the County Cup. They peaked at the right time. Every player had improved throughout the year. I am really proud of all of the work they put in and their ability to work as a team. A lot of our progress came from their dedication and motivation and 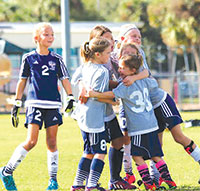 Leading the team was seventh-grader Morgan Maile with 8 goals throughout the tournament. “Morgan has such poise and finesse on the soccer field. She is a silent leader in her own way and the younger girls really look up to and respect her,” added Reeves. While many of the girls play together on the MICMS Middle School team, they had some great young talent with fifth and sixth grade players who have grown up in soccer through the Optimist Club Soccer Program. “We have watched these girls grow under the Optimist soccer program over the past 4-5 years. This is why the expansion to travel soccer is so important, it allows the kids on Marco who love soccer and want to play more competitively to take things to the next level with their friends and teammates. In the past, kids have had to go to Naples or even further to be on more competitive teams. We can now migrate the kids here on Marco into the Travel and Competitive teams together and build strong age 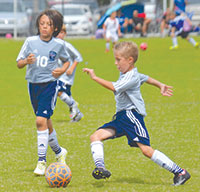 groups of teams going forward,” explained Meg Bonos, President of the Optimist program. “I get so excited about this when you see the 50 or more 3 and 4 year olds in our future stars program. I want my 3 year old to be able to play on one of these teams one day.”

After beating the #1 ranked team in the tournament earlier in the day, the U9 Marco Island Sharks coached by Tom Bonos and Adam Campkin, advanced to the Championship game. However, the team lost a tough fight to the North Ft. Myers Knights in the finals. “I think the boys gave it everything they had in their first game and beat the only team that they had lost to earlier in the year. These boys fought hard but just came up short in the end. It was a great experience for them and they learned a lot about themselves as soccer players,” highlighted Adam Campkin, assistant coach of the team. 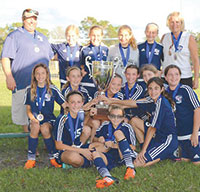 year tournament. ““We made the decision early on to enter the U9 boys team into the U10 division of the LCYS League to challenge them and get them experience playing more competitive soccer. They proved to themselves that they are able to play full-sided soccer against older teams and really compete outside of Marco Island. More importantly, they really learned how to work together. It was a big transition and the kids really started to learn and trust each other on the field,” added Tom Bonos, Head Coach and Director of Coaching for the OCMI Soccer Programs.

The U12 Boys coached by Patrick Baldwin and Jon Phillips, also playing 8v8 for the first time, were playing some tough competition in this league. This newly formed team successfully pulled together a group of boys who hadn’t played together before and faced many teams who have played together for years. The team went 9-4-2 during the season and missed advancing to the tournament semi-finals by 1 point. “The kids played tough against some really good teams. Nick Vergo and Wyatt Bailey played really well for us this year, but it was really rewarding to 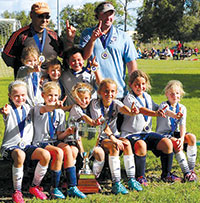 Although the Fall Recreational Travel program has ended, the players continue to play in the on-Island Optimist Recreational Soccer League that hosts over 230 kids on 34 teams. The Marco Island Sharks Recreational Travel program will continue in mid-January with training and tournaments for those soccer players who want to play soccer throughout the Spring. “I was so proud to see all of our teams progress this year. Watching our kids beat programs that have thousands of kids available to play for them from Ft Myers to Naples is pretty impressive. Having people on the sidelines from other programs comment on how great our Marco Island Sharks kids play together is really nice to hear. We were often asked how does such a little Island produce such great soccer teams. Those comments make all the practice time and dedication pay off. We have some really dedicated volunteer coaches and a great trainer in Rob Stoutenberg. They deserve all the credit in building our kids to be great players, great sportsmen and wonderful teammates,” says a very proud Tom Bonos, Director of Coaching for the Soccer programs.