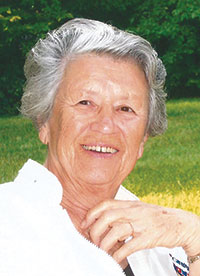 She was born on March 29, 1924, in Sidney, OH, the daughter of the late Charles O. and Gladys (Hetzler) Middleton.

On December 3, 1944, she married Robert C. Sargeant. Thelma was a homemaker and enjoyed china painting and motor home traveling. She loved spending time visiting with her family and friends. Bob and she spent their winters in Marco Island.

She was preceded in death by one grandchild; one sister, Mrs. Paul (Eileen) Berner; and one foster daughter, Michelle (Randall) Watercutter.

Mrs. Sargeant was a 1942 graduate of Green Township High School in Plattsville. She worked for Stolle Corp. during World War II.

Over the years, Thelma and Bob have been very active and supportive of the two communities they called home — Shelby County, Ohio, and Marco Island. Locally, the couple has been a major contributor to the Marco Island Historical Society and Veterans’ Memorial Park. All told, they donated more than $100,000 to Veterans’ Park, including a recent $81,000 contribution that allows the Veterans’ Memorial Fundraising Committee to begin work on the long-awaited Freedom Fountain.

In 1997, the Robert and Thelma Sargeant Scholarship Fund, which is a perpetual fund, was established to annually assist Fairlawn graduates and college students. Band uniforms and instruments also have been donated to Fairlawn schools. They also are annual contributors to the Shelby County Applefest, and in 2008, they served as grand marshals in the parade. The Sargeants also were primary donors to the Hospice suites at the Dorothy Love Retirement Community in 2008.

Funeral services were held Saturday, Sept. 6, at noon at Cromes Funeral Home in Sidney, Ohio, with the Rev. James Oates officiating. The service was followed by burial at Cedar Point Cemetery in Pasco.