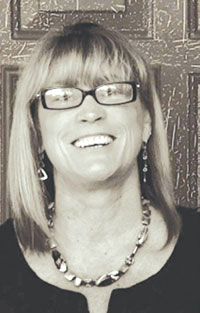 Our little Tammie Lynn Yaeger, beloved wife, mother, sister and daughter passed away peacefully on March 4, 2014, in her home in Bandera, TX, surrounded by family and friends.

Tammie bravely fought cancer for nearly a year and a half before her passing.

Tammie was born January 8, 1963, in Copley, OH, to Harold and Lilly Bennett. Tammie moved to Marco Island at an early age, where she grew up with her four sisters and eventually met her husband, Harlow Alonzo Yaeger III (Lon). Tammie gave birth to the light of their lives, their son Harlow Yaeger IV, in 1987, and as a family, they lived in several parts of the country before settling in their favorite state — Texas.

Tammie will be remembered for her kind spirit and genuine love for both people and animals. It was often said of Tammie that she had never met a stranger, and the countless friends and loved ones she leaves behind prove that statement true.

Tammie is survived by her husband of 26 years, Lon Yaeger, and her son, Harlow, of Austin. She also is survived by her father, Harold Bennett, and four sisters: Tonya Webb, Terina Cherry-Foster, Anne Feinman and Jamie Bakke, along with an extended family of aunts, uncles, cousins, nieces, nephews and brothers-in-law.

A memorial service was on Wednesday, March 12, at Purple Sage Ranch in Bandera. The family asks that donations be made to Cowboy Capital Pet Assistance League (C.C.P.A.L) or to the Arthur Nagel Community Clinic of Bandera County.

We are all better people for having breathed the same air as our precious angel Tammie.