Not Just a Lady…an Arlington Lady 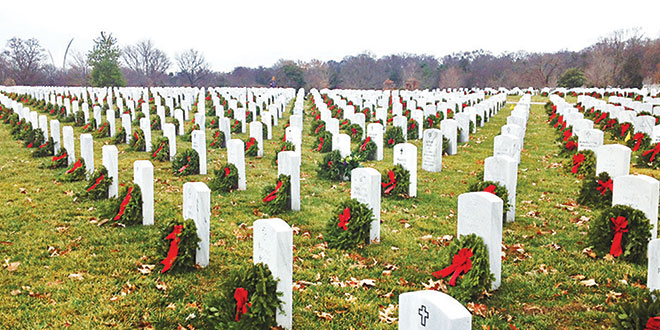 “I am an Arlington Lady because I care and consider it an honor and privilege. It is important for the families to know that

the sacrifice their loved ones have given in the service of their country, will never be forgotten.” – Nella Neary

The Arlington Ladies is a group of volunteers with the purpose of representing the Army Chief of Staff, his wife and the “Total Army Family”, during funerals at Arlington National Cemetery. Its origins trace back to 1948. In 1973, Julie Adams, wife of General Creighton Adams, initiated the Army version and soon thereafter it was established as an independent organization.

Nella Neary is an Arlington Lady and Marco Island resident. She spends the summer months in Virginia honoring her duties at Arlington National Cemetery for Army personnel funeral services. “Every funeral is important,” says Nella. “And I have never missed a day of my duty. Even Hurricane Sandy, in 2012, could not keep me from attending a service.”

Nella became an Arlington Lady in 2004. She was attending services for a personal friend, General George S. Patton, son of famous WWII General George Patton. The chaplain at 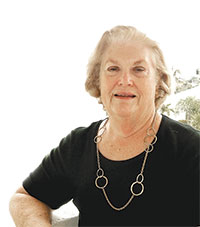 the service recommended her to the Arlington Ladies. A recommendation is the only way to be introduced to the organization. She was thrilled and honored at the opportunity to make such an impact. After a few days of training, Nella Neary was a full member of a very small and prestigious organization. There are only about 65 members of the Army Arlington Ladies today.

Each Arlington Lady attends up to three services a day. Two Ladies are scheduled for each service. Nella describes her duties: “Before each service, I learn as much as I can from the Chaplain about the service member and their family. I then write a card on behalf of the Arlington Ladies, include it with a card from the Army Chief of Staff (currently General Raymond Odierno), and the total Army Family. I then present them to the family.”

Going above and beyond, Nella always tries to do something extra for the families. “During one service, I asked my Escort to collect the shells from the rifle salute so I could give them to the family.” At another service, Nella offered the wife in attendance her coat because it was so cold. The wife responded “Thank you, 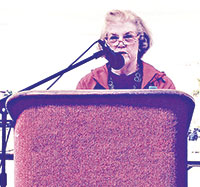 Nella volunteered to read names during the recent visit of the Vietnam Memorial. SUBMITTED photos

but my husband never had a warm coat during his time in battle. I can go without, too.”

The Arlington Ladies attended 1,864 services in 2014. While Nella can only guess at the number of services she has personally attended, she quickly adds: “Each service is important. It’s not about numbers. It’s about the families and service members who have sacrificed for this country. I take each service personally.”

Nella is also active during her time in Marco. She is a very enthusiastic member of the Marco Island Shell Club. On her shelf, under glass, is a rare shell estimated to be 3.8 millions years old. Another passion is the Florida Gulf Coast University Girls Basketball team. “I have baked them cookies before every home game,” she says proudly. “And they have never lost a home game since!” As a member of the Daughters of the American Revolution – Marco Island Chapter, Nella volunteered to read names during the Vietnam Wall ceremony earlier this month.

In April, Nella will return to Arlington Cemetery to continue her duties. “I am honored and blessed to be part of the Arlington Ladies. I feel it is the least I, and the rest of us, can do for our soldiers.”