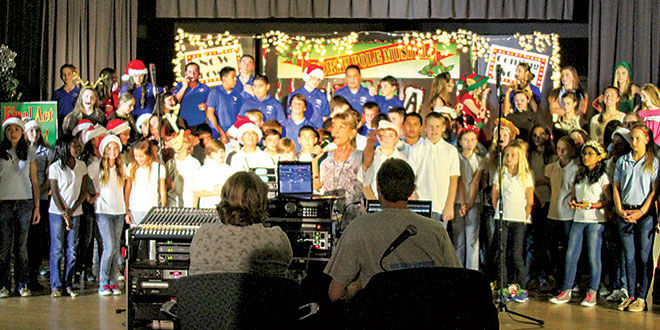 Song and dance filled the gym at Marco Island Charter Middle School (MICMS), much to the delight of friends, family and other classmates. “North Poles: The Musical” was another popular production put on by the school, directed and choreographed by Karen Raymond, MICMS chorus and performing arts teacher. 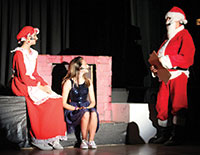 It all began with the North Pole wanting to put on a musical. The “Try-outs Solo,” was performed by Emily Boxma. The “Hoofin’

It” solo was performed by Morgan Broxson. The cast then sang and danced to “No Christmas Blues.” The “Chillin Solos” were performed by Jimmy Munoz, Bella Valencia, Jesse Giansanti and Mikayla Rivera. There was a mix from the ever popular “Nutcracker,” and the “Heart of Christmas Solo” performed by Emily Boxma. The reprise was North Pole Musical.

The stars of the musical were accompanied by the MICMS All-Starz, and they finished the evening with a medley of songs from “Frozen” to entertain the audience: “Concert Festival Series,” “Frozen Heart,” “For the First Time in Forever,” “Love is an Open Door,” “In Summer,”

It is a great experience to see your child perform in the plays. The students learn to create the appropriate backdrops, scenery and props. At the same time, they’re learning to hone their dancing and vocal talent while performing in front of an audience.

Director Karen Raymond and all of the performers would like to thank Roger Raymond and Kurt August for running the lights and sound work. They would also like to thank Martie Miller and Terese Glasser for video production. Finally, the students would to thank the MICMS faculty, staff and the School Board.