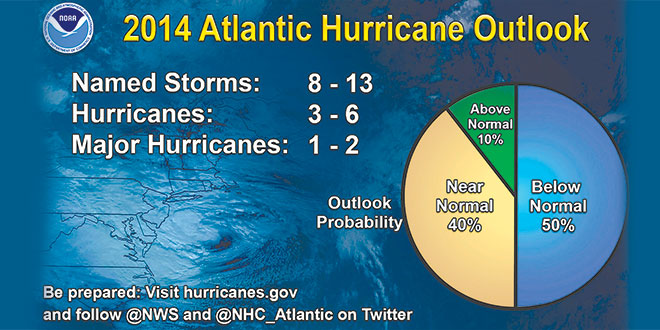 June 1 ushers in the 2014 Atlantic hurricane season, and the National Oceanic and Atmospheric Administration’s Climate Prediction Center is forecasting a “near-normal” or “below-normal” season. The Atlantic hurricane region includes the North Atlantic Ocean, Caribbean Sea and Gulf of Mexico.

The reason: the anticipated development of El Niño this summer. According to NOAA experts, El Niño causes stronger wind shear, reducing the number and intensity of tropical storms and hurricanes, while also strengthening the trade winds and increasing the atmospheric stability across the tropical Atlantic. These conditions make it more difficult for cloud systems from Africa to intensify into tropical storms.

“Atmospheric and oceanic conditions across the tropical Pacific are already taking on some El Niño characteristics,” explained Gerry Bell, Ph.D., lead seasonal hurricane forecaster with NOAA’s Climate Prediction Center, in a written statement. “Also, we are currently seeing strong trade winds and wind shear over the tropical Atlantic, and NOAA’s climate models predict these conditions will persist, in part because of El Niño…The expectation of near-average Atlantic Ocean temperatures this season, rather than the above-average temperatures seen since 1995, also suggests fewer Atlantic hurricanes.” 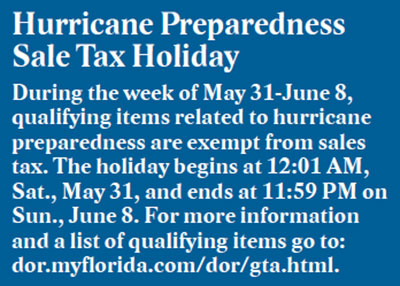 averages of 12 named storms, six hurricanes and three major hurricanes, based on the average from 1981 to 2010.

Despite this prediction, NOAA Administrator Kathryn Sullivan, Ph.D., urged the public to not be complacent: “Even though we expect El Niño to suppress the number of storms this season, it’s important to remember it takes only one land falling storm to cause a disaster.”

To that end, Sullivan added, NOAA is expanding its network of life-saving products available to the public this year with new tools at the National Hurricane Center (NHC). An experimental mapping tool will be used to show communities their storm surge flood threat. The map will be issued for coastal areas when a hurricane or tropical storm watch is first issued, or approximately 48 hours before the anticipated onset of tropical storm force winds. The map will show land areas where storm surge could occur and how high above ground the water could reach in those areas.

Early testing on continued improvements to NOAA’s Hurricane Weather Research and Forecasting model (HWRF) shows a 10 percent improvement in this year’s model compared to last year. Hurricane forecasters use the HWRF along with other models to produce forecasts and issue warnings. The HWRF model is being adopted by a number of Western Pacific and Indian Ocean rim nations.

The size of the tropical cyclone forecast cone will be a bit smaller in 2014 as well. The cone represents the probable track of the center of a tropical cyclone, and is formed by enclosing the area swept out by a set of imaginary circles placed along the forecast track (at 12, 24, 36 hours, etc.). The size of each circle is set so that two-thirds of historical official forecast errors over the previous five years (2009-2013) fall within the circle.

Finally, to help those living in hurricane-prone areas prepare, NOAA offers hurricane preparedness tips, along with video and audio public service announcements in both English and Spanish, featuring NOAA hurricane experts and the FEMA Administrator at www.hurricanes.gov/prepare.

“It only takes one hurricane or tropical storm making landfall to have disastrous impacts on our communities,” said Joe Nimmich, FEMA associate administrator for Response and Recovery, in a written statement. “Just last month, Pensacola, FL, saw five inches of rain in 45 minutes — without a tropical storm or hurricane. We need you to be ready. Know your risk for hurricanes and severe weather, take action now to be prepared and be an example for others in your office, school or community. Learn more about how to prepare for hurricanes at www.ready.gov/hurricanes.”