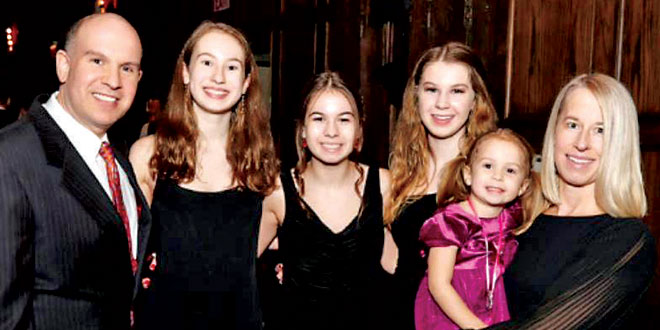 What would you do if Cornell, MIT, Notre Dame, Princeton and the U.S. Military Academy requested the favor of your presence for the next four years? How about if, in addition, the U.S. Army offered to give you what amounts to a full scholarship at all of those schools? Kasey Bersh, an MIA senior graduating in June 2016 was recently faced with this dilemma. How did she get in this scrape, and what did she do about it?

Kasey grew up in Northbrook, Illinois, (pop. 40,000), an affluent North Shore suburb of Chicago and neighbor of Northwestern University. Through her junior year, she attended Glenbrook North High School (GBN). Kasey found GBN (about 2,000 students) to be an extremely challenging school. “All the kids in my classes were as smart or smarter than I was,” Kasey recalls, “All of them went on to college. It had to be one of the best high schools in the country.” While at GBN, she took every available AP and honors course. She was inducted into the National Honor Society, was Lifestyle Editor of the school newspaper, an award winning state level debater, and was recognized for her achievements in science and honors physics. She was also accepted into American Mensa, which boasts 57,000 members, “sharing only one trait – high intelligence.” To qualify, members must have scored in the top 2% of the general population on an accepted standardized intelligence test. On a whim and with no prior experience, Kasey went out for the GBN swim 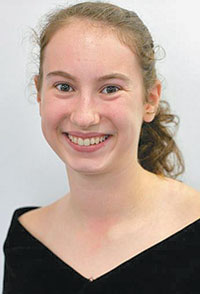 team, making the all-conference team as a junior. “Going out for the swim team was one of the best decisions I ever made,” Kasey said, “in many ways, it shaped me as a person.” And then, at the end of her junior year, her family moved to Marco Island, but not before checking out the schools.

Kasey’s parents, Brad and Karen, stayed on top of their kids’ academic progress. Karen, a school teacher, gave up her teaching job when Kasey was born. Three more daughters followed. “Karen has developed educational theories over the years,” Brad told me. “She deserves the credit for the academic success the kids have had. Early on, Karen turned off the TV and gave them crayons. Consequently, the kids became voracious readers. Because of all the reading they did, they were able to better focus on the written word.”

The Bershes had been visiting Marco Island for five years, and all had fallen in love with it. In June 2015, Brad, a Sr. Vice President with Morgan Stanley, had an opportunity to relocate to Marco Island. First, he scheduled a meeting with Jane Watt, the founder and chairman of Marco Island Academy (MIA). Bersh was pleased to learn that MIA, although not offering AP courses, did offer a panoply of honors courses, along with the complete high school AICE curriculum. AICE or Advanced International Certificate of Education is written and overseen by the University of Cambridge in England, ranked by Times Higher Education as one of the world’s top five universities. As 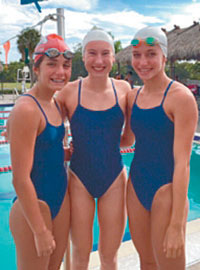 with honors and AP courses, AICE classes cover more in depth and require individual research and initiative. Inclusion of this curriculum is a pretty good indication of a school’s commitment to excellence in education. (MIA was recently recognized in the Washington Post as one of the most challenging high schools in the nation – number 56 in Florida and 255th in the country, with 85% of graduates attending four-year colleges.) Impressed by Ms. Watt’s enthusiasm and her explanation of the MIA curriculum and opportunities, Bersh promptly enrolled Kasey and two of her sisters at MIA (Olivia, age 6, will be going to Tommie Barfield Elementary).

At MIA, Kasey seems to have resumed where she left off at GBN. She is now Editor-in-Chief of the MIA school paper and captain of MIA’s swim team, where she broke two school records and was district champion in the 50 and 100-yard freestyles. Also during this school year, she was a National Merit Finalist, one requirement of which is to score in the top 1% of the PSAT or Preliminary Scholarship Aptitude Test. She was also an Advanced Placement Scholar, requiring top scores in at least three AP exams. Finally, Kasey was recognized for her writing skills, receiving awards for her essays for the Association of Women in Mathematics and for the Voice of Democracy, a scholarship program, sponsored by the VFW.

At MIA, she loaded up on AICE and honors classes, supplementing those by taking online AP classes through Florida Virtual School. When asked to pick her favorite class 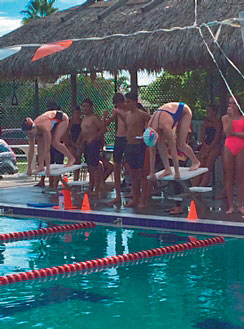 Kasey (right) about to launch in a meetagainst Lely. She went on to win the 50 and 100-yard freestyles, setting MIArecords. Submitted Photos

at MIA, Kasey went for Thinking Skills, an AICE class, which she is taking now. “It really allows me to hone my quantitative and logical capabilities,” Kasey said, “I like that the small population at MIA allows every student’s experience to be pretty personalized.”

Kasey started writing the essays necessary for her college applications at the end of last summer. One of her ambitions was to become an officer in the U.S. Army. “I work well in a structured and regimented environment,” she said. “The Army offered this.” This was a consideration to be weighed in every school she applied to. Her parents noticed this tendency early on. “Kasey would make lists, even as a kid,” her father said, “she was always busy accomplishing things.” As to serving in the Army, Brad Bersh believes this came from Kasey’s being up on current events in the world. “[Because of her concern] Kasey wanted to serve her country,” he said. Kasey traces her interest in a military career to a National Geographic documentary on West Point she saw in elementary school. “By my junior year in high school, I realized that my disciplined, determined nature was very cohesive with the Army’s values,” she said. The Army couldn’t have said it better.

The U.S. Military Academy (USMA) at West Point seemed to be the best route to where Kasey wanted to go. She soon obtained nominations from Senator Marco Rubio and Congressman Curt Clawson. While researching the USMA, she discovered another way to her goal – an ROTC scholarship. 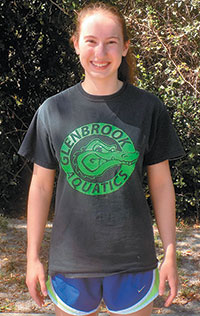 The Army was offering what amounts to a full scholarship to participating universities, for those students who qualified after a rigorous application process. Kasey went for it, and was accepted into the program. Now she could pursue her dream and go to a non-military college, if she so desired. “I’ve been interested in most subjects since I can remember,” Kasey told me, “I am thinking of astronomy, biology, and environmental science, as well as a STEM major. Medical school is also a possibility.”

This spring, the college acceptances came rolling in. Kasey had been accepted to Cornell, MIT, Notre Dame, Princeton and the U.S. Military Academy. Three of these (MIT #5, Princeton #7 and Cornell #18) were ranked in the top twenty of the world’s best universities by the Times Higher Education World University Rankings. Military colleges were not ranked.

One thing all these schools had in common was a viable path to a career in the Army’s officer corps. Kasey and her dad visited most of these schools, some more than once. By early April, she had narrowed her choices down to MIT and Princeton, with plans to visit MIT one more time.

Kasey has decided to go to Princeton University. “Princeton’s academics, Army ROTC program, and overall atmosphere really differentiated it from any other university I was considering,” Kasey told me. “Since I’m not set on a major yet, the fact that Princeton encompasses both a liberal arts and STEM-based education really appeals to me.” Like most everything else she has done, she had obviously given this a lot of thought.