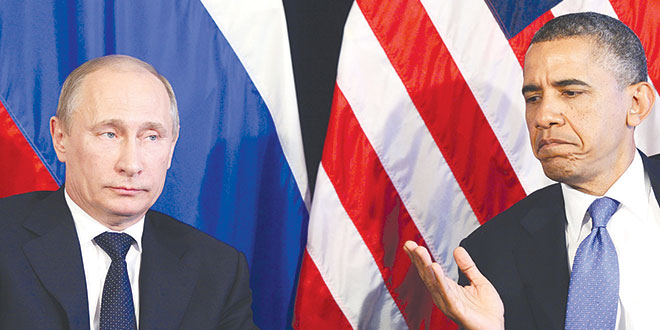 As we wake up to a beautiful Marco Island Saturday morning, basking in the hot rays of a summer sun, the rest of the world slowly but surely moves towards a world-wide confrontation of good against evil as violence escalates in the absence of true world leaders and true world leadership.

There are those amongst us who still do not think that evil exists, and there are also those who believe strongly that we, the Americans, are the evil force around the world. How unfortunate of them! Today, I firmly believe that a lack of leadership, not just here in America in particular but the rest of the world in general is causing evil to take root and surround us.

How can anyone explain the shooting down of a civilian airplane flying at 33,000 feet above earth using a very sophisticated weapon system which must be operated by highly trained personnel? There will be many apologists on behalf of Vladimir Putin, the Dictator of the Evil Empire, finding reasons why he would not have allowed such an evil act. This is one instance I find no reason to be doubtful that Putin has blood on his hands. He is a murderer who someday will be standing in front of a firing squad facing red hot bullets flaying through the air towards his evil face. You can never be flexible in your dealings with such a murderer as some of us are finding out the hard way.

Putin had an evil and sneaky strategy to take over Ukraine. Using so-called Ukrainian separatists and arming them with sophisticated weapons they did not truly understand how to use; he was slowly but surely infiltrating the country from the east. The results of his faulty strategy were deadly. Shooting down a civilian aircraft with nearly 300 innocent men, women and children aboard deliberately cannot be forgiven or excused under any and all circumstances. SA-11 missile otherwise known as BUK or GADFLY in the West is part of a very sophisticated weapon system. It can’t be operated by members of a militia of separatists or amateurs. It requires a radar guiding system which operates separately from the weapon itself to lock-on to the target. Once the radar is locked on the target, an order will be given from the commander on the field to fire the missile, and in the opinion of experts, that commander had to be someone other than the so called “Ukrainian separatist.”

The sun continues to rise over the horizon and it is getting hotter and muggier by the minute. Marco Island is still peaceful; I do not hear any explosions in the distance or see tracer bullets flying over my head.

Yet, few hundred miles to the east of Ukraine in Iraq, ISIS is forming the first Islamic Caliphate in the world in what was once known as the country of Iraq where we spent blood and treasure to establish Democracy. The last Caliphate in the Middle East ended when Mustafa Kemal Ataturk established a secular Republic in Turkey and sent the last Caliph packing with only the clothes on his back off to Italy where he died in poverty. Once again, due to a massive lack of leadership, America left Iraq prematurely and gave way to the Radical Islamic thugs to operate with impunity, killing, beheading and otherwise destroying anything or anyone that stood in their way. As of this morning, they have surrounded the oil rich city of Mosul and issued an ultimatum to all Christians in the city to leave or face death! Is anyone surprised that no one gives a damn that there will be an Islamic Caliphate with access to some of the richest oil fields in the world? Oil is money; money is weapons; and weapons are power in the Middle East and elsewhere around 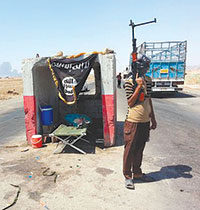 An al-Qaeda-inspired militant stands guard at a checkpoint captured from the Iraqi army outside Beiji refinery on June 19.

It is really hot now in Marco Island, but not as hot as it is in Israel where 80 percent of the population is experiencing exploding rockets above their heads. Hamas, the most evil force on the border of Israel, recently kidnapped, killed and buried three Israeli boys (one with an American passport), and when some angry Israelis retaliated, started to send rockets into populated areas of Israel. Hamas received very sophisticated weapons through Egypt via tunnels in the desert and turned Gaza into an armed camp. When the Muslim Brotherhood ruled Egypt for a brief but most unfortunate time, massive amounts of weapons were smuggled into Gaza on a daily basis. Hamas also established tunnels into Israel and were beginning to make incursions into areas where settlers lived. As of this morning, almost 70,000 Israeli Defense Forces are participating in an operation to rid the area of the Hamas murderers — a daunting task at best of times! What is the reaction from our government and the West? Tell the Israelis to show restraint! How would my fellow Americans react if Mexico and Canada started shooting rockets into major American cities? The readers should have no doubts whatsoever in their minds. Israel is only the immediate and convenient target for these radical thugs; America is the real main target. They want to destroy America at any cost, and they are working hard at it, taking full advantage of the lack of leadership in our country. When the thugs of the world decide America is weak (real or perception), they will attack us again and again and again.

It is now nearly noon on Saturday; pretty soon the clouds will roll in from the east. We will start hearing the thunder in the distance and seeing the flashes of lightning followed by brief but cool showers of relief later in the afternoon.

In Afghanistan, it is almost midnight with temperatures over 100 degrees; few brave American military personnel are busy taking down bases, packing up equipment and getting ready to leave the country completely by Nov. 1 this year. Once again, with the best of intentions to save a country from the Radical Islamic thugs of Taliban and to give a chance to the oppressed, we spent blood and treasure, only to end up having to dismantle everything we worked and paid for and come home, victims of a lack of real leadership and understanding of the real world at home. As soon as the last American soldier or Marine leaves Afghanistan, Taliban will be back in full force, worse than ever, oppressing the women, killing non-Muslims, attacking and destroying the schools we built one brick at a time, and turning the country back to the ninth century.

Here is a brief summary of why this story is called “A Very Dangerous Time.”

Russia under Vladimir Putin’s dictatorship continues their expansionist dreams to bring back the glory of the demised Soviet Union, which ruled a third of Europe in the second part of the last century. ISIS is fast establishing an Islamic Caliphate in Iraq, rich in oil and money with plans to attack the Western world. Iran is fast approaching the moment of truth when they will have nuclear weapons in their arsenal and will undoubtedly try to “wipe Israel off the map of the world.” Taliban is taking over Afghanistan and bringing that country back to the ninth century.

And, on this Marco Island Saturday afternoon, I am thinking of how WWI started 100 years ago from the assassination in Sarajevo of the Austro-Hungarian Empire’s Archduke Franz Ferdinand and his wife Sophie. That is all it took to ignite the fire which resulted in the total number of military and civilian casualties of more than 37 million, the deadliest conflict in human history.