No Snoozin’ in Goodland 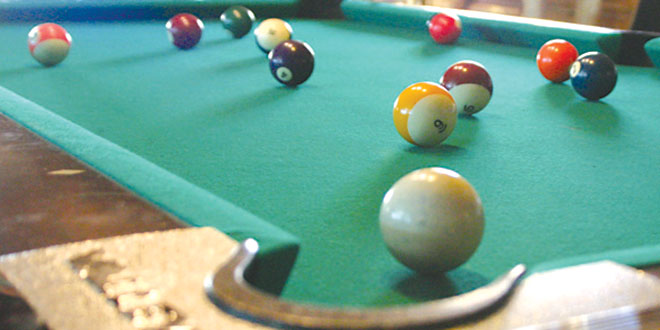 Seasonal visitors driving through Goodland or visiting some of our excellent eateries, observe a sleepy village (except on Sundays) where, during the week anyhow, nothing much seems to happen. There are no stores, beaches, theaters, or malls. The village is surrounded by water and mangrove forests. There is only one way in and one way out. What do those guys do anyhow? Quite a bit actually.

One of my favorites is the self-styled Pool Sharks and Red Hot Mamas. Formed in 2009, this eclectic bunch gets together every Thursday afternoon, at a member’s house to shoot pool for nickels, dimes, and bragging rights. The group is made up of a World War Two veteran, a retired FBI Agent, a retired hardware store owner/school teacher, and a retired builder. Two of us are long time seasonal residents, and two live here full time. The bond that we have in common is an unconditional love for and appreciation of Goodland.

For three hours, passers-by can hear shouts of triumph and groans of defeat reverberating from the pool room. Praises for Kentucky basketball, Florida football, and Duke basketball are also voiced. The merits of Urban Meyer are debated. History and politics are dissected. But mostly, nine ball and eight ball are played with intensity, punctuated by a hearty guffaw at a miscue.

At 4:30, the group breaks up to meet for a late lunch with their wives. It was the wives who decided on the name for the group. These ladies are supportive of the Pool Sharks and active in the community. They obviously consider themselves to be Red Hot Mamas and look the part. We generally meet at one of our favorite restaurants either in Goodland or Marco Island. Occasionally, one of the Mamas will have us over for dinner or desert.

At these gatherings one can learn of life during the Depression in rural Kentucky, Life in J. Edgar Hoover’s FBI, unfair competition to small business owners by Walmart, and life in the U.S. Navy in the 60’s. Experiences in the Michigan National Guard during the 1960’s Detroit riots are also recounted as are the personal and poignant experiences of each of us as we have progressed through life.

For me, Thursday afternoon is usually the social highlight of the week, and as we drive home from lunch, I am already looking forward to next Thursday.

Barry was a practicing attorney before he worked as a Special Agent of the FBI for 31 years. Barry worked for several government agencies another ten years before retiring to Goodland in 2006. Barry is presently the Secretary of the Goodland Civic Association