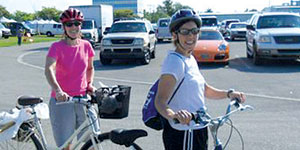 According to Lisa Schmidtfrerick-Miller, one-third of the US population doesn’t drive. And according to the US Department of State, the number of miles Americans drove dropped for the very first time in 2008, and car ownership is declining from its peak in 2001. Schmidtfrerick-Miller, a member of the city’s Bike Paths Committee, believes that bicycles have a key role to play in the future of transportation, even on Marco, and she hopes to create a network to join island cyclists of all stripes, for both communication and fun.

She, and fellow cyclist Jim Seegers recently co-founded ‘Bike Marco,’ a virtual network meant to identify and unify all members of the Marco biking community, from casual hobbyists, to parents, to those who use bikes for their primary source of transportation. “It’s three newsletters per year, plus any other communication as needed. Right now it’s small and simple because we are all volunteers.” Long-term plans include 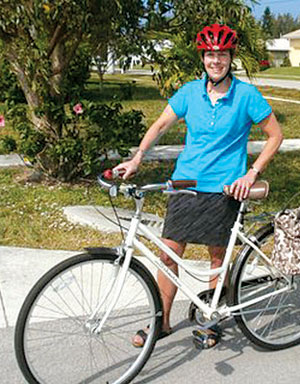 Lisa Schmidtfrerick-Miller is happy that most ofMarco is accessible by bike and forgoes using her car as much as possible.

a webpage if a volunteer can be found to develop it. Bike Marco has been signing up members from a booth at the Farmer’s Market but Schmidtfrerick-Miller would like to get the word out to the widest audience possible.

The purpose of the city’s Bike Paths Committee has been to work with the city to create infrastructure that allows for safe biking around the island: wide, shared use paths, signage; much of which is paid for through federal or state grant money. It’s been a worthy goal, according to Schmidtfrerick-Miller, who points out that most of the island is now accessible by bicycle. The next logical step was to try to bring the users of that infrastructure together in an identifiable group, and get useful feedback from them to guide both the city and the committee.

Al Musico of the Bike Paths Committee concurs. “People who tend to communicate directly with the committee members tend 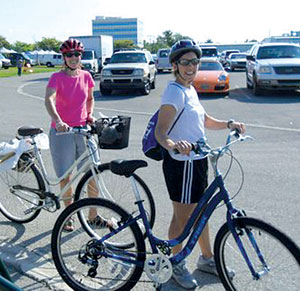 to be hard core bike enthusiasts, but we need input from the casual riders as well.” Musico also hopes to see Bike Marco membership grow and become an independent voice for the community’s biking needs. “If there’s a request [for a project] before council…they [Bike Marco] can represent what the general population wants.”

“Parking has always been an issue on Marco Island. Did you know that you can fit 10 to 12 bikes in one car space?” Schmidtfrerick-Miller lives on Marco part time and hopes to retire here full time. “Cold and hilly” western New York is where her job and other residence are located. So when she’s here, Schmidtfrerick-Miller can be found practicing what she advocates. “I love being able to ride everywhere [around Marco] and I try to use my bike instead of my car as much as possible when I am here!”