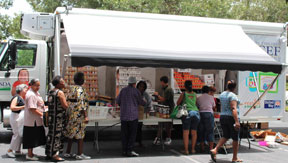 “While NCEF’s Lunch Boxes of Love mobile food pantry was making its latest delivery, the annual Kids Count report from the Annie E. Casey Foundation was released. Its latest data shows there were 12,397 impoverished children in the county in 2009, which is a 2 percent increase,” said Karen Scott, NCEF trustee and grant chair. “We know the increase is even greater today given the tough economic times, and it is why NCEF is passionate about finding a solution to childhood hunger in Collier County.”

“The children love getting what they think are strange-looking things. We explain to them that they are fruits and vegetables 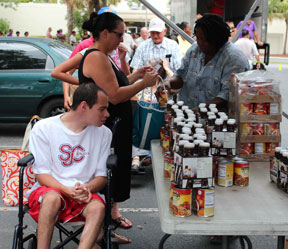 and tell them the names of each piece of produce,” said Katie Schweikhardt, food coordinator in Collier County for Harry Chapin Food Bank. “We hope that providing healthy food to children will encourage them to eat better throughout their lives, and we appreciate NCEF for their commitment to providing nutritious food to children in Collier County.”

Lunch Boxes of Love hunger initiative began when $630,000 was raised at the 2011 Naples Winter Wine Festival through a fund-a-need auction lot. After the festival, NCEF partnered with Harry Chapin Food Bank to have a mobile food pantry outfitted and stocked for weekly deliveries of nutritious food at schools and child-focused agencies with the most underserved and at-risk children in the county. To date, 108 deliveries have been made, and the 1.5 million pounds of food distributed is in addition to Harry Chapin Food Bank’s ongoing food distributions to families in need.

Since 2000, Naples Children & Education Foundation, which is governed by NCEF trustees, has been dedicated to making a profound and sustaining improvement in the lives of underprivileged and at-risk children in Collier County, where pockets of poverty threaten 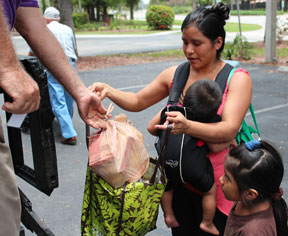 thousands of children’s ability to thrive. Through the Naples Winter Wine Festival, NCEF has raised $107 million since 2001, making it the most successful charity wine auction in the world. Proceeds have impacted more than 150,000 children through 37 charities, and major initiatives funded in collaboration with other private and public entities have included a pediatric dental clinic and an early learning center.

Harry Chapin Food Bank solicits, collects and stores quality food for distribution to families in need through a network of nonprofit agencies in Lee, Collier, Hendry, Charlotte and Glades counties, who provide over 1 million pounds of food to more than 30,000 people monthly.  For every dollar donated, about $6 in food value goes back to the community. In the past calendar year, Harry Chapin Food Bank distributed more than 13.7 million pounds of food and other grocery items valued at more than $22.5 million. This is roughly the equivalent of 11 million meals to people in need.