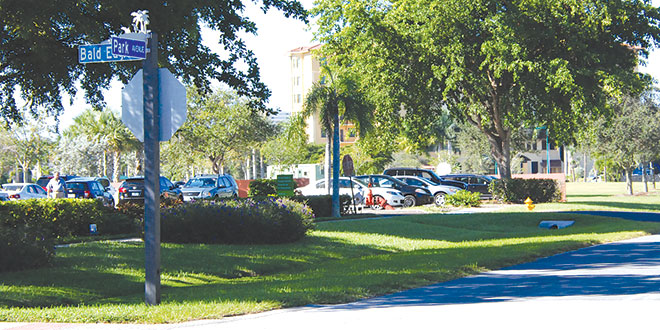 The median is slated for construction during the first week of November, and while city staff does not yet have a firm price for the project, they are soliciting bids from contractors. Still, the project comes at the right time, with the first Farmers Market of the season set for Wednesday, Nov. 12.

“This will not affect the traffic on Bald Eagle,” assures Pinter, but people exiting Veterans Memorial Park via Park Avenue at Bald Eagle Drive will only be able to turn south, or right. The median is meant to help quell the continued traffic problems generated by the Farmers Market each Wednesday from November to April. This permanent median island will replace the temporary “no left turns” signs that the city puts up during the Farmers Market, and will prevent motorists from going straight across Bald Eagle into the Marco Town Center Mall.

“One of the problems was created by cars wanting to go straight through the intersection of Park Avenue and Bald Eagle into the town center, which not only created a potentially hazardous traffic situation but also increased the traffic back up on Park,” explains Alex Galiana, recreational facilities manager for the city’s Parks and Recreation Department.

He continues: “The major problem is the 2,000 people that visit the 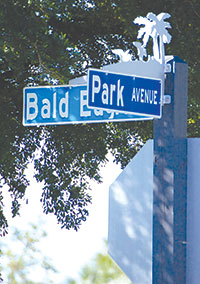 Farmers Market within a four-hour period on Wednesday mornings during the months of January, February and March. Any event on the island that draws that amount of people within a short duration will cause traffic congestion.”

The project is the result of a collaborative effort between Pinter, Galiana, the Marco Island Police Department and City Manager Roger Hernstadt. When Hernstadt arrived in Marco earlier this year — in the thick of season and the Farmers Market — he noted that the measures the city was taking to deal with the traffic congestion at the intersection were not working. These included the temporary “no left turn” signs and police presence.

“After the new city manager witnessed the traffic patterns, he suggested that we implement a new one direction traffic flow in the parking lot to avoid head on traffic conflicts and facilitate vehicles exiting from the Farmers Market,” says Galiana. “The city manager also suggested and MIPD instituted a no left turn at the corner on Elkcam and Bald Eagle for those leaving the Farmers Market.”

For this year’s market, the traffic pattern will be the same, only now the “no left turn” will be permanent. There also will be an extra officer added to further help traffic flow, and all traffic signage in the vicinity of the Farmers Market will be strictly enforced.

“We do want to remind drivers in the main parking lot that they must exit the lot using the gravel driveway at the west side of the lot and adhere to the directional signage,” Galiana stresses. “We will continue to monitor traffic patterns and behaviors, and implement additional modifications if deemed necessary.”