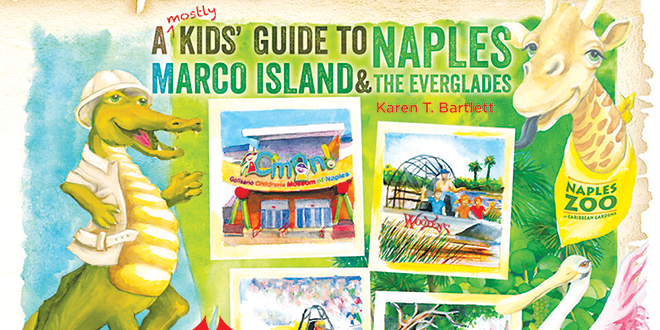 Looking for fun things to do with your kids during spring break? Pick up a copy of A (mostly) Kids’ Guide to Naples, Marco Island and the Everglades by Naples resident Karen T. Bartlett, click your seatbelts and take off for adventure. The book is written for youngsters, but includes tons of fun facts and an indextreasure of names, web addresses, and phone numbers for the sights included in the colorful 79-page soft-cover guide. The section on Marco Island starts off with the Calusa Indians, and mentions the Marco Island Historical Museum and its life-size interactive Calusa village and the “cool” events it offers, like Pirate Day in January. Also on the “must see” list is Cape Romano, 10,000 Islands, Keewaydin Island and its marvelous shelling, and of course, Tigertail Beach. “Why didn’t they 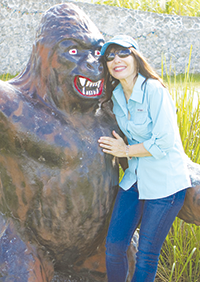 “Feelin’ cool in my new shirt, and my big strong (smelly) guy seems pretty excited about it, too,” says Karen Bartlett.

name it Panthertail, when we have panthers in the wild here, but no tigers? Because Tiger Tail is an important Native American name here, including Chief Tigertail of the Seminole Tribe and Buffalo Tiger, a founder of the Miccosukee tribe.” (excerpt from page 40) There are countless ways to explore Marco Island and the surrounding areas, according to Bartlett. Just hop into a kayak, jetski, pontoon boat, sightseeing vessel or take to the skies by parasail or helicopter for a breathtaking look at paradise. If you are interested in wildlife, become a birdwatcher or dolphin researcher for a day. Like sharks? Take a special fishing trip with captains who are also environmental scientists and check out sand sharks, nurse sharks and blacktip sharks. Sections on Naples, the Everglades and Immokalee are just as fascinating and filled 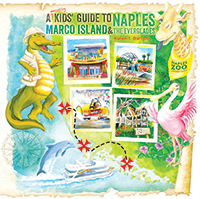 with beautiful photos and fun illustrations. Bartlett was the Travel Editor for Gulfshore Life of Naples for 16 years and contributed articles many North American and Caribbean publications.

After writing and photographing 11 destination travel books for other publishers, Bartlett established her own publishing company, “Mostly Kids Guides, LLC” and released “A (mostly) Kids’ Guide to Naples, Marco Island and the Everglades” in February 2015. She is already working on additional guides for kids (and grownups who hate ordinary guidebooks). The book is available at Sunshine Booksellers on 1000 N. Collier Blvd and its second location at 677 S. Collier Ave., the Blue Mangrove Gallery, and The Artist’s Gallery on Marco Island, as well as many shops and galleries in Naples and the Everglades. Check it out online at www.mostlykidsguides.com.