New 3-Day Format Proves to be a Hit 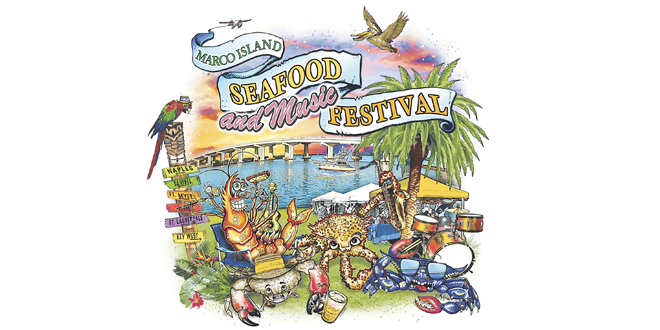 The first time was a good time for Claude and Sue Cousineau where the Marco Island Seafood and Music Festival was concerned. “We love watching people,” said Sue Cousineau, who, like her husband, was attending the annual festival for the first time. “It’s a people watching event.” Residents of Ottawa, Ontario, the Cousineaus were on a one month-long vacation on Marco when they decided to check out the Saturday session of the festival, held recently at Veterans Community Park. They came away impressed. “I think it’s a great event,” Sue Cousineau added. “I think it’s fun. I like the friendliness of it. Everybody seems to be in a good mood. The music is good.” Her husband found the multitude of dining options to be of terest, especially that of the aquatic variety. “It’s all about food, seafood, and that’s new to me,” he said. This was the seventh year for the festival, which serves as a fundraiser for Marco’s Sunrise and Noontime Rotary Clubs, and the Kiwanis Club of Marco Island. The proceeds help fund many of the clubs’ charitable efforts, including scholarships, dictionaries for third grade students, heart surgery for underprivileged children in Third World countries, support to local charter schools, assistance to St. Matthew’s House and Habitat for Humanity and more. The festival features live music, 60 arts and crafts vendors, a kids’ zone with a bounce house, slide, a rock-climbing wall, and more. There are, of course, a multitude of food vendors, with the highlight being the purveyors of fresh fish, grouper, crab cakes, stone crab, shrimp, crawdads, chowder and more. This was the festival’s first time as a three-day rather than two-day event, running from Friday through Sunday. Its founder and organizer, Stan Niemczyk, said the added day helped make the festival a success, with more than 10,000 attendees, up about 15 percent over 2014. “The weather was perfect,” said Niemczyk regarding the overall attendance. “Marco has a record number of visitors this year and we did go three days, which we’ve never done before.” Niemczyk said the organizing committee has not had time to discuss the format of the 2016 festival and whether any changes will be considered. “But generally speaking, we have something that works so I don’t think there’ll be any changes,” he added. “We anticipate staying with three days.” Jon and Suzan Busch came to the Saturday session with fellow Marco residents Ashley Coburn and her daughter Avery, age 5, who was clutching a balloon animal to her chest. “It’s a doggie,” said Ashley of her prized possession. When asked what she was enjoying about the festival, her focus was instead on her favorite hue. “I love my color pink,” said Ashley with a shy smile. The Busch family attends the Marco Island Seafood and Music Festival every year. “We like to support all the events on the island and of course, we want to enjoy some seafood,” said Jon Busch. Suzan Busch said they enjoy encountering friends in the festive atmosphere. “We see a lot of people we know,” she said. “And there is fun stuff for her (Avery) to do. Lots of rides, lots of food, it’s fun.”