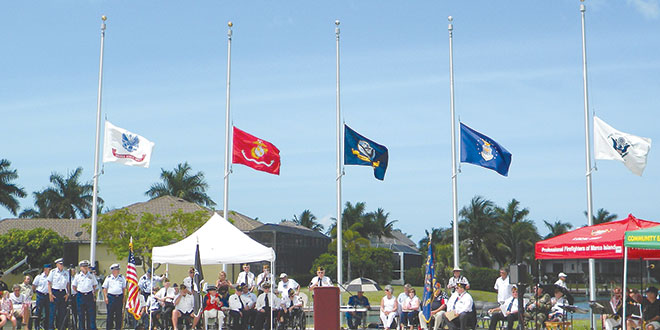 Veterans, current service men and women and family members were positioned around the flag plaza as the wind whipped the five flags, flying at half staff. PHOTOS BY MELINDA GRAY

Veterans Community Park on Marco Island was filled with red, white and blue on Monday, May 26, as veterans and civilians joined together to celebrate Memorial Day and honor those who lost their lives while serving our country in the Armed Forces.

“Memorial Day is not just for those who didn’t come home; it’s for those who came home and never forgot,” said Henderson prior to his introduction of the ceremony’s key speaker, Vietnam Veteran and Commander

Lee Henderson, VFW Post #6370 and Marco Island CAP commander, was flanked by veterans and other honorees dressed in their military uniforms.

In his speech, Dollinger recited a poem by Roger Robicheau, Spec 5 in the U.S. Army, and quoted John 15:13: “There is no greater love than to lay down one’s life for one’s friends.”

“The men and woman that we honor and remember today have proven they are not just friends to Americans, but they are friends to men and women in all corners of the world who we have supported in times of conflict,” said Dollinger. “The sacrifice these American heroes have made has indeed changed our world.”

He noted that nearly 1 million men and women have died defending the United States of America, and more than 73,000 brave men and women are still listed as MIA from WWII.

Boy scouts, cub scouts and police were among those in attendance.[/caption] class=”CBNGeneralContent”>“Today, we remember our brave men and women from all branches of service that served in every American conflict and made the ultimate sacrifice, but we simply can’t stop there; that is not enough. We must also remember their families who have sacrificed so much. Long after the battlefield guns are silenced, the bombs stop exploding, the children of our fallen warriors will still be missing their parent. Spouses will still be without their life-partner. Parents continue to grieve over their lost sons and daughters who died way too early. You and I must be there for them. Today cannot be the only day we remember this commitment,” said Dollinger.

This year’s opening prayer was given by Reverend Thomas McCulley of New Life Community Church; and the national

Members of each branch of service were asked to stand and salute as their song played.

All music was provided by Wes English and the Marco Island Strummers. They played for all services as present members of each branch stood and saluted throughout their respective song. A heartfelt and patriotic soliloquy was given by Mike and Janet Stapleton, followed by the playing of Taps.

Among those in attendance were members of the VFW post, the Civil Air Patrol, Coast Guard, City Police and Fire Rescue Department, Boy Scouts and Girl Scouts, Cub Scouts and Brownies, Marco Island City Manager Roger Hernstadt and other members of the city council. 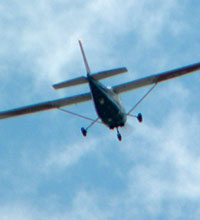 each U.S. military branch — Army, Navy, Marines, Air Force and Coast Guard — and a commemorative brick-paved walkway leading to the 80-foot, paved circle, which is highlighted by a star, medallions and commemorative benches.

Finally, Lee Rubenstein, commander of the new Marco Island American Legion Post 404, touched on future plans for Phase II, including the Freedom Fountain, while many thanks were expressed to those who have helped, and continue to help, bring the Veterans Memorial vision to life.

“Freedom isn’t just a word in the dictionary; it’s the right we have earned to speak and act as we want without any political restraint. Freedom for our country is made possible by the 22 million US veterans, some of which are here today. Never forget says it all,” said Rubenstein in closing.